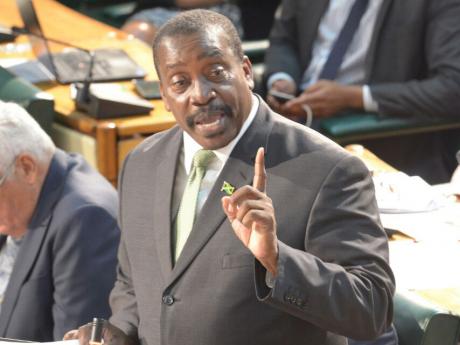 The National Security Minister Robert Montague is warning licenced gun holders who illegally brandish their weapons in public spaces that they will lose the privilege to hold a firearm permit.

"It does not matter who you are, who you are related to or where you work," Montague said ‎shortly after he began his contribution to the Sectoral Debate in Parliament today.

His warning coincides with public attention following Monday's charging of 29-year-old businessman Zachary Reid after he was video-taped pointing his licensed weapon at members of the public on Sunday night, hours are the annual Carnival road march.

"Let me be very clear, if you pull your weapon, or discharge it in a public space illegally, it will not only be removed, and revoked, but you can take this commitment to the bank, it will not be returned," Montague said.

"So pull it at your own peril, and pray to God you don't shoot or assault any innocent person."

The police say Reid is a restaurant operator who operates in upper St Andrew.

He was charged with illegal possession of a firearm , resisting arrest, public disorder and assault.