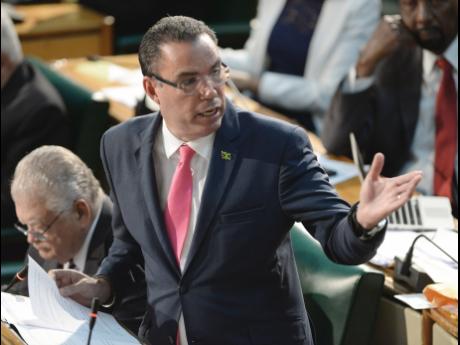 Jermaine Barnaby Photo
Addressing the Sectoral Debate in Parliament yesterday Vaz admitted that the job creation plan is behind schedule but argued that this is not cause for concern.

Daryl Vaz, the minister without portfolio in the Ministry of Economic Growth and Job Creation with responsibility for land, environment, climate Change and investments, has expressed confidence that the economy is poised to create thousands of jobs.

Addressing the Sectoral Debate in Parliament yesterday Vaz admitted that the job creation plan is behind schedule but argued that this is not cause for concern.

“Last year I announced that we had a considerable investment package under review, which would contribute to the creation of tens of thousands of jobs. We have encountered challenges along the way. However, we are undaunted by the setbacks, and have identified the corrective measures to lead us to success,” Vaz told the House of Representatives.

“We have seen a surge in investment activities since March last year. For the past fiscal year, capital expenditure by JAMPRO-Facilitated Investment Projects was targeted to be over US$360 million, of which it is estimated that approximately US$257 million was achieved as at January 2017. This expenditure is estimated to have provided over 10,000 jobs,” added Vaz.

He said total investments supported by the Development Bank of Jamaica (DBJ) for the year so far is over J$25 billion, with the potential job creation of more than 5,000 persons.

According to Vax, among the public/private partnership transactions completed are:

He added that 192 new businesses were created or supported through the DBJ’s programmes. J$43 million in grants were disbursed to 27 companies under the Innovation Grant from New Ideas to Entrepreneurship Programme.

“These were mostly micro, small and medium enterprises (MSMEs) with innovative products or business models that required financing to boost their operations,” said Vaz.