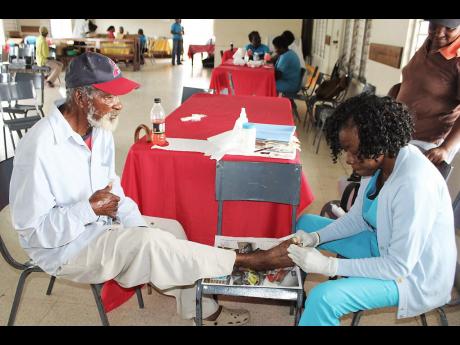 A member of health team caters to the less fortunate during the St Thomas chapter of the Lay Magistrates’ Association’s Good Samaritans programme.

April is recognised as Lay Magistrates' Month, and as a part of its celebration, the St Thomas Chapter of the Lay Magistrates' Association of Jamaica relaunched its Good Samaritan Programme.

The project was first launched last year and catered to approximately 50 homeless people in and around the town of Morant Bay.

The outreach endeavours got off to a late start last Thursday due to the weather conditions which in turn affected the number of persons who benefited from the programme.

Approximately 25 people were bathed and fed, while others had their hair groomed.

The Princess Margaret Hospital also gave its support as a team was on location to provide medical assistance in check-ups and prescriptions.

In his address at the opening ceremony, National President of the Lay Magistrates' Association of Jamaica, Errol Greene commended the efforts of the local association.

According to him: "It's always heartwarming when people, out of genuine love for others, put together events such as this."

Greene spoke of the importance of helping others, especially those less fortunate and stood in agreement with Custos Marcia Bennett, who suggested that the association makes the programme a quarterly one.

President of the local association, Rupert Scott, explained that the annual event is done as the flagship programme for the St Thomas lay magistrates.