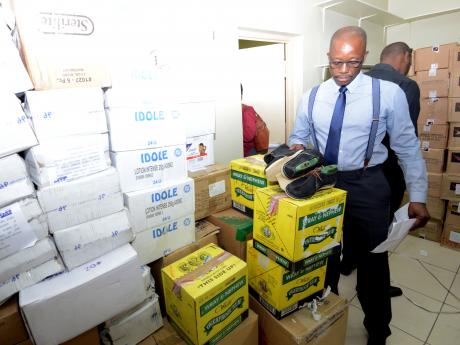 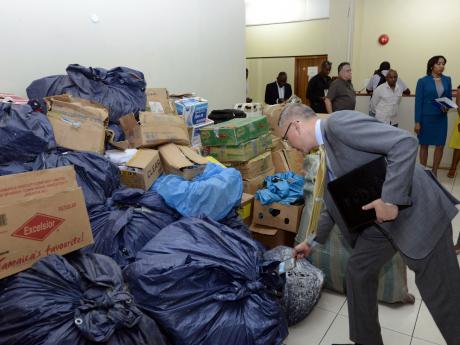 Eric Khant, deputy chief of mission at the United States Embassy in Kingston looks at one of the counterfeit DVDs seized by the police - Norman Grindley photo. 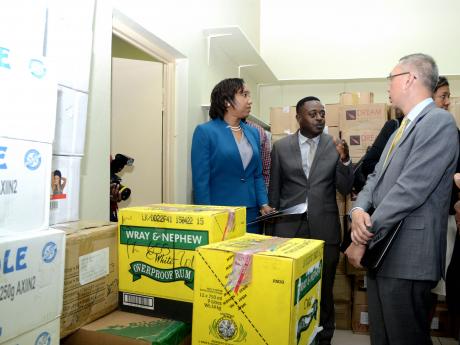 More than $1.9 billion in counterfeit goods were this morning destroyed by members of the Counter Terrorism and Organised Crime unit as investigators ramp up their offensive against organised criminals in Jamaica.

The items do not include some $20.5 million worth of fraudulent footwear and other items that were seized during an operation in Montego Bay, St James two days ago.

Two persons have been arrested in connection with that incident. IN PHOTO: Eric Khant, deputy chief of mission at the United States Embassy in Kingston looks at one of the counterfeit DVDs seized by the police - Norman Grindley photo.

They were put on display during a special press conference hosted by Assistant Police Commissioner Clifford Chambers at his Kingston offices.

Afterwards, they were loaded into trucks and taken to the Riverton City dump in Kingston for destruction. The police say in the past year, 32 persons were prosecuted in relation to the seizures of the items disposed of this morning.

"The enforcement of intellectual property crimes has become more dangerous in recent times because there is now a direct link and association with organised crime," said Assistant Commissioner of Police Clifford Chambers.

"We are seeing the networks using the same safe houses, the same routes, the same gang members and the same communities to move around these goods and we have arrested persons. So you can understand clearly the link between guns, ammunition and the current environment with regards to counterfeit items," he said.

The destruction of the goods coincide with Intellectual Property Week 2017.