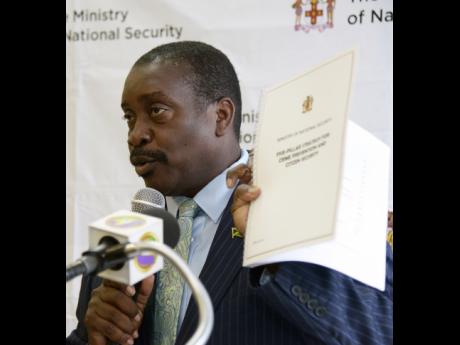 Ian Allen
Minister of National Security Robert Montague shows off the five-pillar Strategy for Crime Prevention and Citizen Security Plan during a press conference at his office in Kingston yesterday.

The question of privacy in relation to the use of drones has once again come up for discussion in the public domain with reports of unmanned aerial vehicles intruding into the private space of individuals at their homes.

Minister of National Security Robert Montague said that his ministry has received reports from a number of persons who complained that they have encountered drones in their private space.

"There has to be a balance between pleasure and privacy and also safety, because they (drones) ought to be in restricted areas. People are now buzzing around with their drones everywhere," Montague revealed yesterday during a post-Sectoral Debate press conference at his ministry in Kingston.

He told journalists that the policy unit at his ministry was carrying out research to strike a balance between privacy and pleasure, and safety and commerce.

DRONES FOR THE POLICE

In a related issue, Diane McIntosh, permanent secretary in the Ministry of National Security, told a meeting of Parliament's Public Administration and Appropriations Committee in October last year that some $55 million was allocated to acquire drone technology for the police. She noted that $30 million of the amount allocated would be spent by the end of the just-concluded 2016-2017 financial year.

At the same time, Minister without Portfolio in the Ministry of Industry, Commerce, Agriculture and Fisheries, J.C. Hutchinson, told farmers last year that plans were well advanced for the use of drones to combat praedial larceny.

He expressed confidence that the use of the drones would provide relief for farmers, who have been facing significant losses as a result of theft.

Hutchinson told stakeholders at a drone demonstration session in Lowe River, Trelawny, on August 16, 2016, that the drones would be equipped with technology to locate stolen animals.