Doctor's Advice | Could he give his girlfriend Viagra? 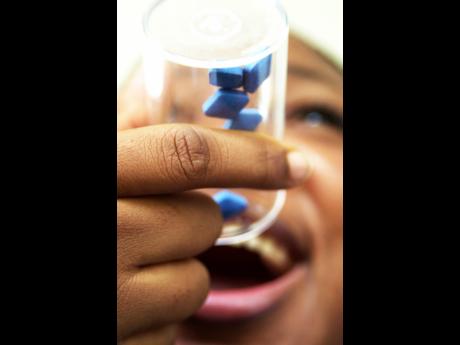 Q Hello, Doc. Could I give my girlfriend any medication to kind of 'pep up' her interest in sex? We are both 19 and we have been having sexual intercourse for around six months. For me, it is great! If I could have it every single day of the week, I would.

But my girlfriend is quite different. She just lies there and looks at the sky. She lets me do it, but she has never had any interest in it, Doc.

A I am afraid that there are no pills that 'turn women on'. Doctors have tried giving women Viagra and it simply does not work. All it does (in some cases) is to increase vaginal lubrication.

In the case of your girlfriend, you just have to accept that quite a lot of young women are not particularly interested in sex. That may change as she gets older, but I certainly cannot guarantee it.

One final thought: you make no mention of contraception. Please do not get this poor young woman pregnant.

Q Doctor, a young guy has asked me if I will send him a photo of my intimate personal parts.

Should I agree? What do you think? He says that 'everyone' is doing it.

A Well, it is true that this sort of thing has become much more common. Bizarre as it may seem, quite a few males and females have taken to sending out pictures of their genitals.

But the first thing I want to point out to you is that this practice is of doubtful legality. However, it is unlikely that you would get prosecuted.

More importantly, you are probably not aware of the fact that a lot of these 'rude' photographs end up on the Internet! Unfortunately, in many countries, there are young men who think it would be a good idea to 'post' a picture of a girl's sex organs - sometimes with her name and address too.

So my advice to you and other young women is to refuse to send photographs of your sex organs. You never know where they will end up!

Q I started the Pill two weeks ago, Doc. Now, I have real tender breasts plus spots of blood coming from my vagina.

Are these the symptoms of thrombosis? Should I stop the Pill immediately?

A No way. These are definitely NOT symptoms of thrombosis (clotting). They are just side effects which commonly occur during the early days of taking the Pill. They will probably diminish and disappear very soon.

But if they haven't gone by, say, a month from today, then see a doc. She will almost certainly change your brand of Pill.

Above all, don't stop taking the Pill because of transient side effects. That would be a good way to get pregnant.

Q Am I right in thinking that if I have sex with a girl half-way between her periods, she won't get pregnant, Doc?

A No! You have got this the wrong way round. Half-way between her menses is the most likely time for her to get pregnant, so don't do it!

If you are thinking of having sex, you need to use reliable contraception. Go and talk to a doc or visit a clinic, where you can get advice.

Q Last month, my menses arrived on the second and then again on the ninth and the sixteenth. Since then, nothing!

What is going wrong?

A You clearly have some hormone problems, which I hope will settle down. But having frequent periods is not good for your health and may soon make you anaemic.

Please consult a doctor. Ask her to examine you and to prescribe something which will regulate your menstrual cycle.

Q Unfortunately, I had sex with three guys last month, Doc. I seem to have 'got away with it' because my menses arrived on time. Is there any chance I could have caught a venereal disease?

A Quite a chance, I am afraid. Sexually transmitted infections (STIs) frequently produce no symptoms in females, so you could have caught a germ and not know it.

I must point out to you that having sex with several guys is just asking for trouble - particularly if you don't use condoms. My advice to you is to go to a doctor now and ask for a check-up and tests for STIs. I hope they come back negative.

Have I harmed my health? Do you think that this episode makes me a homosexual?

A No, I certainly don't. However, it is possible that the other boy may be gay.

Anyway, your health will not have been harmed by this episode, but I think you would be unwise to let anything like this happen again, especially before a race.

Q My fiancee and I do not want to have children. We are wondering whether we could both get sterilised before we get married so that we would not have to worry at all about conceiving babies.

A I cannot imagine a surgeon in Jamaica or anywhere else agreeing to sterilise two young people who have never had a child. I am sorry to be so frank, but I do think this is a real foolish idea.

What if you two split up? What if one or both of you has a change of mind about having children?

Surely, the sensible thing now would be to choose a reliable method of contraception and stick to it. After all, your viewpoints may change a lot in five or 10 years' time!

Q I met a boy of 20 years who wants to marry me. The only problem is that he often beats me. He just loses his temper and lashes out, hitting my face or breasts. What should I do, Doc?

A Just dump this appalling young man. No woman should stay with a guy who beats her. You should throw this cruel, unkind creature out of your life immediately. Why not report him to the cops?

Q I went to a doctor and asked him why my fiancÈe doesn't orgasm during sex. He responded: 'You must give her foreplay.'

What is foreplay, Doc? I do not know this word.

A Foreplay means caressing given to a woman (or to a man) BEFORE intercourse starts. You usually do it with the fingertips or the lips. It really is very important, so as to make the female fully aroused.

If you just google the word 'foreplay', you will find around 36 million sites from which you can learn a lot.