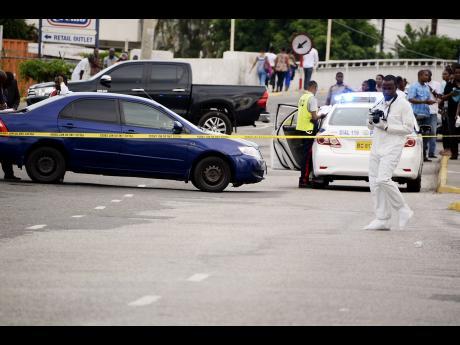 Investigators at the scene on Constant Spring Road where Constable Leighton Hanson was shot dead yesterday.

Police Commissioner George Quallo is this afternoon appealing to members of the public to desist from sharing images and videos on social media from the scene where Constable Leighton Hanson was shot and killed yesterday.

Quallo has described the killing as cruel and callous, adding that it was unfortunate that it happened while Constable Hanson was performing his duties to serve and protect members of the public.

It’s reported that the policeman, who was attached to the St Andrew North Division, was attempting to apprehend a suspect along Constant Spring Road when the man disarmed him and shot him in the head.

The suspect was later shot by a member of the Jamaica Defence Force (JDF), who was in the area at the time, and later succumb to his injuries at hospital.

Shortly after the incident, several images and videos taken at the scene began circulating on WhatsApp and other social media platforms.

But the police commissioner appealed to members of the public to respect the dignity of the slain policeman and desist from sharing the images on social media.

He also had high praises for the members of the JDF who intervened, saying this should serve as a reminder to criminals that the security forces stand united in the fight for a safer Jamaica.

Meanwhile, Quallo is urging all members of the JCF to remain vigilant and undaunted as they continue to enforce law and order and build safer communities.

He noted that an attack on any law enforcement officer is an attack on the State and the very foundation of the nation’s security.

As a result, he says all citizens must bond together to help the security forces preserve the rule of law as well as the safety, security and human rights of every Jamaican.

Constable Hanson is the third policeman killed since the start of the year.