Where was his partner? Family of slain cop seeks answers 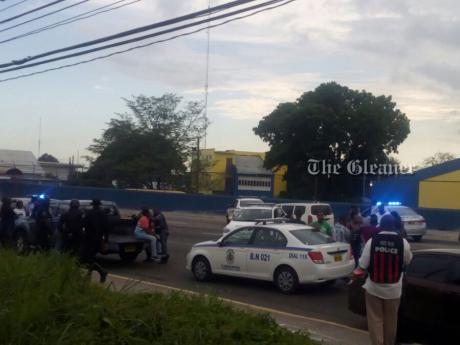 Investigators near the crime scene on Constant Spring Road where Constable Leighton Hanson was shot dead on Friday.

The family of the police constable who was shot and killed along Constant Spring Road in St Andrew yesterday is raising questions about the whereabouts of his partner during the incident.

The police report that Constable Leighton Hanson and another policeman responded to an incident along Constant Spring.

According to the police, Hanson was attempting to apprehend a suspect involved in the incident when he was disarmed and shot in the head.

Speaking to The Gleaner/Power106 News Centre today, the mother of the slain constable Regina Hanson said as far as she is aware her son was not supposed to be alone when he responded to the incident.

Hanson says the question her family wants answered is where was her son’s partner at the time he was struggling with the suspect who eventually shot him.

Constable Hanson is survived by his wife and two sons and is one of four policemen killed in the line of duty since the start of the year. Meanwhile, The lobby group Jamaicans for Justice (JFJ) says the well-being of police officers must be among the priorities for the new Police Commissioner George Quallo.

The lobby group noted that the welfare of police personnel is closely related to their operational capacity and Jamaica’s public security.

As a result, it called for stronger investment in their well-being, both on and off duty, and said this should include a focus on working conditions, physical safety and stress management.