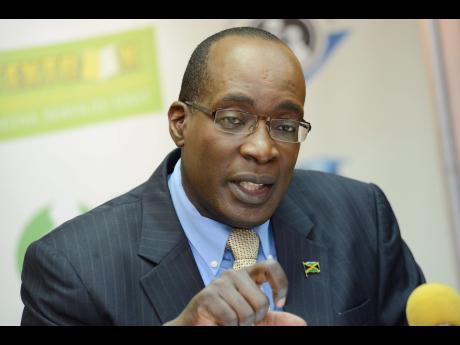 Reid said approximately $1.3 billion of the amount will go directly to secondary schools as he hailed the removal of auxiliary fees in public schools.

Education Minister Ruel Reid has announced the release of over $2 billion to fund the operation of public schools for the rest of the 2016/17 school year.

Reid said approximately $1.3 billion of the amount will go directly to secondary schools as he hailed the removal of auxiliary fees in public schools.

He made the announcement this morning at a press conference at his office at Heroes Circle in Kingston.

He also announced the release of $259 million for infant, primary, all-age and junior high schools.

A further $1.8 billion has been allocated to the school feeding programme under the Programme of Advancement Through Health and Education – PATH.

The allocations reflect increases in the recently approved National Budget.

The release of funds to secondary schools at set periods throughout the school year is part of a new arrangement that was put in place after the Government abolished auxiliary fees.

The move was the subject of much controversy but today Reid said the implementation has been a success and without any chaos.

The Opposition had argued that the government was removing responsibility from parents while curtailing school activities by implementing the election promise.

Reid said for the school year so far, parents have contributed only $893 million of the $2.1 billion that schools had requested to augment government funding.

That's about 43 per cent of the amount schools wanted and the Education Minister said this highlights why the Government removed the auxiliary fee system which was an uncertain source of funding.

Meanwhile, he said schools are to discuss with their parent-teachers' association how much they will request as contribution from parents for the upcoming school year which is to start in September.

The amount each school will request from parents will have to be approved by the ministry.