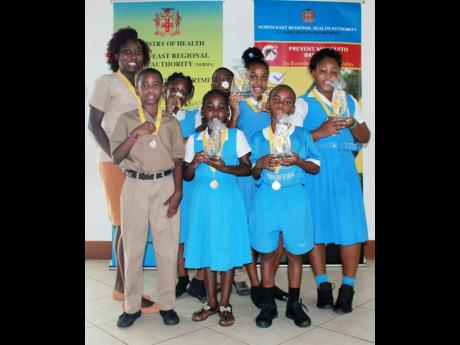 St Mary Health Services concluded its annual Health Month celebrations last week with a drama competition and awards ceremony that aimed to introduce the subject of mental health illness to primary-school students across the parish.

At the event, which was held at the Anglican Church Hall in Port Maria under the theme 'Depression: let's talk,' children from eight competing schools created and performed 15-minute sketches highlighting issues associated with mental health.

The competition was eventually won by students from Mount Joseph Primary School in Enfield, who each received trophies and medals for their efforts. According to the school's grade-one teacher, Karen Thompson, the subject matter and competition were both pertinent as mental health issues are becoming increasingly common.

Thompson told The Gleaner: "I think the drama competition was a really good idea and I enjoyed coaching the children. First, I spoke with them and we discussed the topic and how we were going to define depression, tell the signs, symptoms and causes, and then give a solution on how to treat it.

"They worked really hard up to last night, and I understand that some of them were even talking about it in their sleep. They did really well. I think what gave us the edge was we did something different. We brought a twist to the subject, so instead of just showing people getting sick, we prayed, sang, and danced out depression."

Grade-five student Cidoney Brown added: "I'm glad and really excited, because we didn't have a lot of time to practise, so we had no idea that we would come first. I think the competition was good because it taught me that depression is a medical illness that can affect how you think, act, and behave. And now, more young people will know that when they start feeling depressed, they should talk to others about it."