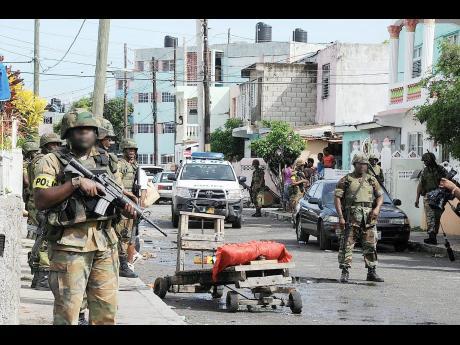 The security forces remain on guard in West Kingston as investigations intensify into the shooting of Leighton 'Livity'  Coke, the brother of drug kingpin Christopher ‘Dudus’ Coke.

Hours after the shooting, police and soldiers took up positions at one of the country’s main public hospitals as doctors there treated the man widely known as ‘Livity’, for gunshot wounds to the right side of his chest and left hand.

A woman who was travelling with him at the time was also shot multiple times and was in serious condition at hospital.

There was also a strong police presence along a section of Spanish Town Road that borders the community of Tivoli Gardens.

Deputy Commissioner of Police Clifford Blake says it is standard procedure after a shooting incident, for the police to conduct an initial assessment and, based on intelligence, deploy personnel where necessary to prevent reprisals and other incidents.

In 2012, Livity was freed of gun-related charges after he was accused of firing at members of the security forces during the May 2010 joint police-military operations in west Kingston to apprehend his brother, Dudus.

Dudus is serving a 23-year prison sentence in a US federal prison on gun and drug charges.