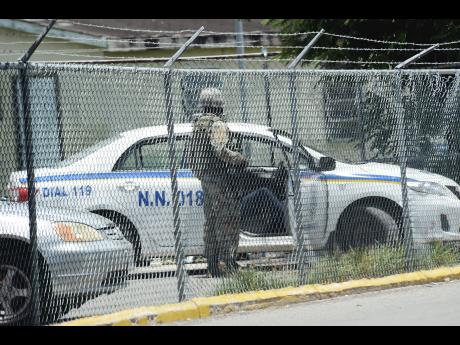 Security could be seen at the Spanish Town Hospital yesterday after Leighton 'Livity' Coke was admitted after he was shot outside the gate of Hellshire beach by gunmen early Sunday morning.

A man detained by the Greater Portmore Police in relation to the investigation into the shooting of Leighton 'Livity' Coke remains in custody.

The man was held yesterday after he turned up at the police station to claim a motorbike that was seized by the police in Hellshire following the shooting incident.

Head of Operations for the Greater Portmore Police, Superintendent Leighton Gray, says the police are now doing a case review which includes determining the ownership of the bike.

Superintendent Gray says the man, who is from the west Kingston area, is still being questioned.

Hours after the shooting, police and soldiers took up positions at the Spanish Town hospital where doctors treated him for gunshot wounds to the right side of his chest and left hand.

A woman who was travelling with him at the time was also shot multiple times.

They both remain hospitalised.