More than 16,000 Jamaicans benefit from Overseas Employment Programme, 62 run off 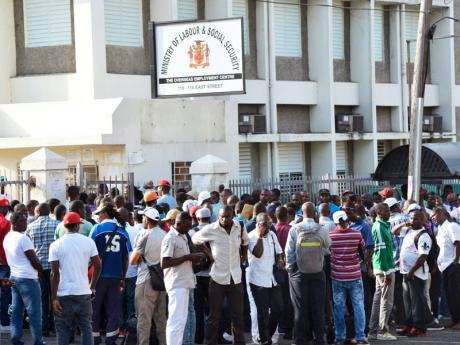 In this file photo overseas employment hopefuls wait outside the Ministry of Labour and Social Security in Kingston.

The Ministry of Labour is reporting that 16,310 persons were employed through its Overseas Employment Programme during the 2016-17 financial year.

This was more that the 15,400 that were projected for the fiscal year.

The Ministry revealed in its annual report to Parliament that 13,405 were employed on farms in the United States and Canada and another 2,471 persons in hotels in America.

Meanwhile, the report revealed that a number of Jamaicans on the overseas work programme absconded.

It pointed out that 36 workers on the US Farm Work Programme went absent without official leave, 18 less than 2015-16 and eight changed status.

As it regards the US Hospitality Programme, 26 workers went missing and four changed their status.