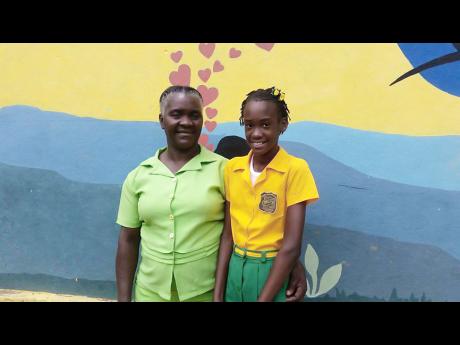 Ten-year-old Sheree Davis of the Minto Primary School in Hagley Gap, St Thomas may be very soft-spoken, but she is a tiger in the classroom.

Described as one of the highest achievers at the rural institution which schools approximately 60 students, Davis has been top of her class ever since she started.

The fourth-grade student says she wishes to become a banker, and her favourite subject is Language Arts.

Sheree told Rural Xpress that the secret to her achievements lies in revision.

"My mother is a teacher and she always encourages me to read over my work and to practise. That is what I've been doing," she said.

According to her: "She has been a high achiever from grade one. When I got her in grade four, she had an average of 90 per cent and she has maintained that. She is a very obedient, soft-spoken girl who is very helpful. You can depend on her to represent the school at any time."

Sheree not only does well in the classroom, but she is also a star on the field, as she is a part of the school's track team, where she participates in the 100m races.

The young achiever told Rural Xpress that she loves her school and community, but hopes that things will get better soon.

"The roads are rough and stony, and it is hard to climb the hill in the mornings to come to school. When I grow older, I hope I will be able to talk to the people who are responsible for the roads and responsible for us so they can come and fix our roads.

And we want water, too. It is hard to go to the river to get water. We want water in our pipes at home," she said, adding that she has to wake up at 5 a.m. to get everything done so she can be at school by 8 a.m.

Hagley Gap, the community in which Sheree lives, has been without piped water and proper roads for many years.

Cries of neglect have been said to fall on deaf ears.

"There are very bright children in the community that can grow up to help around," Sheree said when asked about the potential of Hagley Gap.