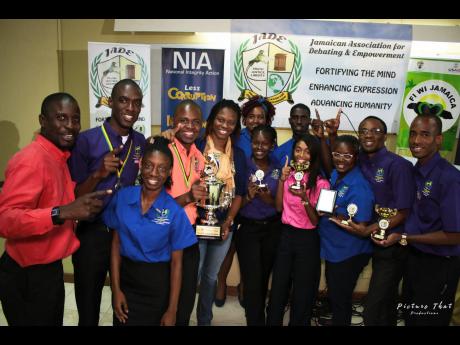 Members of the NCU debate team, along with their coach and assistant coach. 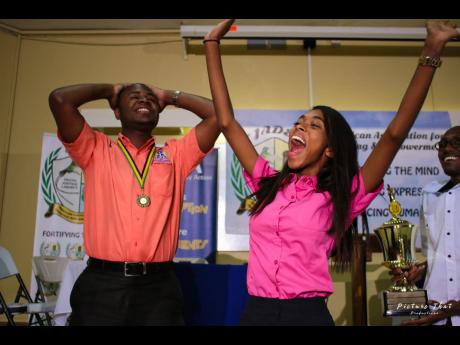 Contributed
Delmas Brown and Jessica Timoll, members of the winning team, react to the announcement of their win at the National Collegiate Debating Championship 2017.
1
2

Having experienced many successes over the years, the Northern Caribbean University (NCU) debate team is hoping to take things up a notch by starting a competition of their own so that teams from all over the world can compete in.

The team's most recently added title - winners of the National Collegiate Debating Championship 2017 - has helped to solidify their mark as one of the best debating teams in the region.

"We would love to be able to enter international competitions or, if possible, create our own. We would love if we could get corporate sponsors to partner with us so we can maintain our dominance and improve our training methods," said head coach Noreen Daley.

The competition, which included students from the secondary and tertiary levels, saw three teams from NCU making the semi-finals and two making it to the finals.

"These accomplishments reminds us that hard work pays off and we continue to be willing to share our debate knowledge with other schools. For example, just recently we began training some students at Knox College to make them ready for our competition the NCU Invitational Debate Series, slated for October. Debate, especially in this British parliamentary format, fosters critical thinking skills and how to articulate ideas in a logical manner," Daley, who was also voted top adjudicator, added.

The team has been awarded more than 23 noted accomplishments and titles over the last four years, both locally and internationally.

"Since 2017, we got second place at UWI Leads Debate (Team A of Jovaney Ashman and Sasha Rowe). For the JADE-NIA National Collegiate Debating Championship, three of the five teams made semi-finals (tertiary division) with NCU Team A of Sasha Rowe and Jovaney Ashman. NCU Team B, Delmas Brown and Jessica Timoll, and NCU Team D, Rushane Nelson and Gabrielle Thompson. Teams A and B made the finals, along with a team from UTech (University of Technology) and one from UWI (University of the West Indies). Team B won and Team A was fourth," Daley said.

Member of the winning team Delmas Brown told Rural Xpress that there is something special about this win.

"Winning the competition last Monday was the result of four years of experience, dedication, and hard work. It was certainly a hard-fought battle against the other universities, who tend to have a tradition of rivalry. Debate has certainly contributed to the stretching of intellectual muscles, and apparently, after four years of that stretch, everything unloaded and culminated in a victory for the NCU team," said Brown.

He hailed his coach for her consistent "and steady passion in advancing the cause of debate and expression at NCU".

The team is now looking forward to future partnerships with a goal in mind to strengthen global impact.jm.com