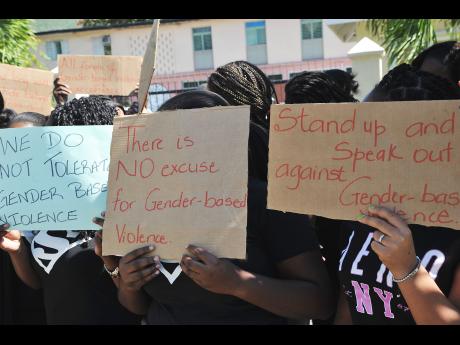 Even as the Police High Command continues to push its 'Love Me To Live, Don't Love Me To Death' campaign aimed at reducing domestic-violence incidents across the island, several rights groups continue to bemoan the indifference with which some members of the police force treat reports.

One of the latest incidents occurred last Sunday when a woman, who was reportedly attacked and beaten by her ex-boyfriend, tried to report the matter at a nearby police station.

Police who turned up at the house took the two to the station where the woman claimed she was laughed at by a male constable who, despite her bruises, informed her that before she could make an official statement against her attacker, she needed to visit a doctor to get a medical certificate.

When she did that and returned to the station, the constable reportedly told her to come back two days later to write the statement.

It was only last Tuesday, two days after the attack, that the ex-boyfriend was formally arrested and charged, though he lives in the same community as the woman.

After the matter was related to The Sunday Gleaner, our news team contacted the divisional commander who reportedly apologised to the woman, and said he has since reprimanded the constable for his nonchalant approach to "something I take very seriously".

Nicheisha Sewell, executive director at the Women's Outreach and Resource Centre, said abused woman continue to deal with indifferent police officers despite the targeted effort being made by the High Command.

"It is very similar to things we have heard, and what the lady needs to do is report the officer," said Sewell.

"Even if my scars are not showing and I come to make a statement, the police have a responsibility to take my statement and to give me a receipt.

"Women continue to complain that when they go to the police station, the officers ignore them or give them the runaround. It appears the cops somehow are trying to stall the process," added Sewell.

She argued that many policemen shy away from domestic-violence cases because of their complexity and the fear that the females will go back on their word.

"In a case of murder, the police do not need my permission to act upon it. When I report domestic violence, I am the one who is left to push the case," charged Sewell.

"There is no legal framework in which the State takes over the case."

In the meantime, social commentator and chairperson of the 'I'm Glad I'm a Girl Foundation', Nadeen Spence, said the police's general hesitance to act is slowly changing, but that there is still a long way to go.

"It is just some police officers who are hesitant to take up the cases. Some of them just don't want to do it, that's how they behave," said Spence.

"So when people say that the women should just go report the incident, they just don't understand."

Joyce Hewett, immediate past president of rights group Woman Inc, argued that the best chance of policemen taking domestic violence seriously is if the force were led by a female commissioner.

The 'Love me to live, don't love me to death' campaign was launched in February by then acting police commissioner Novelette Grant, after more than 20 women were murdered in domestic cases in 2016.

The police have reported that at least four women have been killed in suspected cases of domestic violence since the start of this year.