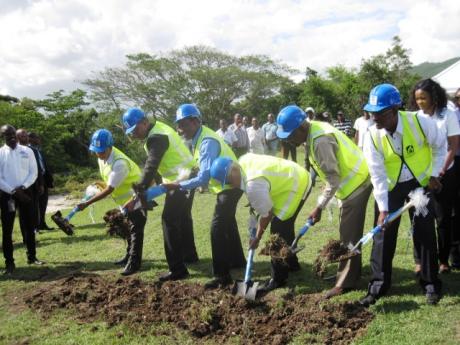 Prime Minister Andrew Holness is promising to make home ownership so easy and affordable that there will be no more squatting in Jamaica.

"A large part of the problem we face is that communities pop up overnight without proper planning and we are not going to continue the haphazard development of our country; we are going to build housing solutions that are affordable,” Holness said on Friday as he broke ground for a new housing development in the Chateau Gardens Housing Scheme in Birds Hill Clarendon.

“Squatter settlements cannot continue because disorderly settlement breeds crime and violence and social disorder. It makes it difficult to bring services to your communities," he added.

One hundred fifty new homes will be constructed in the first phase of the development, but will later expand to a total of 565 units.

The first phase is set to be completed in 18 months.

"The squatting issues that exists now exists because we have not put in place the effective mechanisms to build communities and housing to meet the housing demands that exists,” the prime minister stressed.

He said the government’s strategy is to build so many houses that people will have real opportunity to own their home instead of capturing a piece of land.

Ground has been broken for some 2,000 housing solutions so far this year.

“In the five months between January and May this year, the NHT would have broken ground for more housing starts than it did for 2009 to 2015 and we estimate 5,500 housing starts by the end of this year which will be more than the last six years combined,” National Housing Trust Chairman Nigel Clarke told the gathering at the groundbreaking ceremony.

NOTE: Clarke has since sought to clarify that the comparison between the housing starts since the beginning of the year was to be made to each of the years from 2009 to 2015. "To put that number in context, the NHT's housing starts of 5,500 for this year will exceed the total combined number of NHT starts for the entire three-year period 2012 to 2015," Clarke explained.