Gloria's co-owner 'will forever be in our hearts' 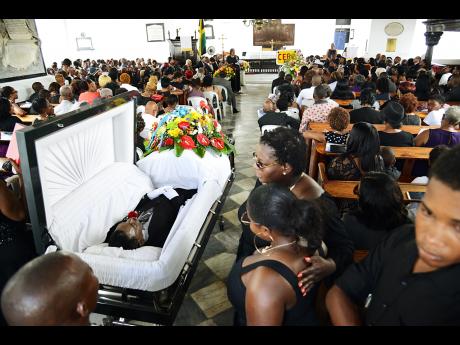 Ricardo Makyn
Mourners stare at the coffin containing the body of restaurant owner Cecil Prawl during his funeral at the St Peter Anglican Church in Port Royal Saturday.

In addition to a packed church, the streets corners and roads in Port Royal were flooded with scores of persons in attendance on Saturday at the thanksgiving service for the life of Cecil Prawl.

The service was held at the St Peter's Anglican Church in the community. Among those in attendance were Member of Parliament for East Kingston and Port Royal Phillip Paulwell and Custos of Kingston Steadman Fuller.

In her remembrance, Kendra Swaby, Prawl's cousin, spoke highly of the love and respect the former co-owner of Gloria's Restaurant showed to persons.

"He highly valued customer service whether or not you had money. His hallmark was respect and love for others," Swaby said.

"He was always a humble and genuine person, but he was still no walkover. He made sure things were organised and well done. We didn't want you to die this way but you will forever be in our hearts," she continued.

In his homily, the Reverend Ulric Wilson encouraged congregants to live an exemplary life while they are alive.

"I encourage you to share memories with each other. Cecil is remembered as enjoying the life he lived and he was also very generous to all who he encountered."

"Let not your hearts be troubled. Real faith rallies our spirits, so that even in loss, we are still assured that we are never alone and you can always go to Him as a loving father," the reverend said.