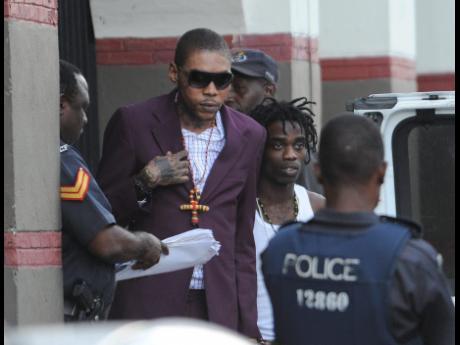 Vybz Kartel being led from the Home Circuit Court in downtown Kingston in 2014.

The appeal filed by dancehall artiste Vybz Kartel and his three co-accused in a murder conviction is to be heard in the Court of Appeal on February 19 next year.

The trial has been set for three weeks.

The trial date was set yesterday in the Appeals Court at a case management hearing.

The defence has been ordered by the court to file its grounds of appeal by the end of October and the prosecution must file its case by November.

Kartel must serve 35 years before becoming eligible for parole, while St John was ordered to serve 30 years.

Both Campbell and Jones were ordered to serve 25 years before they become eligible for parole.

The crown led evidence that on August 16, 2011, Williams was taken to Kartel's Havendale, St Andrew house where he was beaten to death over two missing guns.

His body has not been found but the prosecution relied on a common design, circumstantial evidence, voice notes and text messages to prove the case against the men.