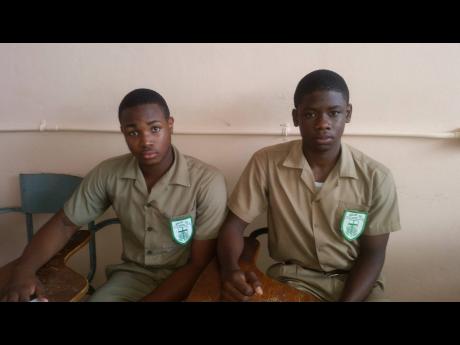 St Thomas’ Rushawn McWhinney and Rahmone Chung are two of five students selected to represent Jamaica at this year’s staging of the Caribbean Schoolboys and Juniors Boxing Championships, to be held in Guyana this month.
Both young men, who attend the Morant Bay High School in St Thomas, were chosen based on their agility, strength and overall skill and discipline inside the ring.
Fifteen year-old McWhinny explained to Rural Xpress how he came to be a boxer.
“My father and his friend founded the St Thomas Boxing Club a few years ago and there were schoolboys doing it. When I was in grade six, I was out of shape, I was fat so I decided to start boxing as well,” he said adding that he encouraged his friend, Chung to also join the club as he wanted company his own age.

Chung, 14, on the hand said he was not very excited about his friend’s invite.


According to him: “I didn’t really want to join because I had really bad anger issues but then I went one day about a month after Rushawn and it’s like something hold me, because I’ve been going ever since.”
The young men both agreed that their involvement in the sport has taught them valuable life lessons and has improved them holistically.
Boxing, they said, has been a form of anger management in both their lives.
“If you get angry while boxing then you stand the chance of losing the fight as anger goes against everything we were taught.  So we’ve learnt to control our anger,” McWhinny said. “It also brought me to a level of fitness above the average school boy especially those my age and it sharpened my skills. I wasn’t really an athletic person and as I progressed I have been improving in sports related activities.”
They also said that the sport has made them more disciplined than their peers.
“Our coach let us know that fighting outside the sport is a no-no because boxing is a discipline sport so whenever situations come up at school we are able to control ourselves or walk it out,” Chung noted. The Leith Hall resident told Rural Xpress that his hope is to become an internationally recognised boxer, such as Floyd Mayweather.
McWhinny though, who resides in Roselle explained that though he loves the sport he would rather 'do it on the side".
According to him: “Nothing is wrong with being athletic and doing sports but I’d like to add another ambition in the mix. I’ve always wanted to own a business so I will work towards that too.”

The young boxers will depart for Guyana tomorrow (May 12) and will compete against schoolboys from 11 other Caribbean countries in the competition’s second staging.