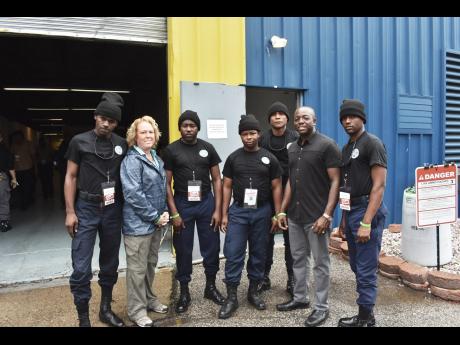 Contributed
Senator Pearnel Charles Jr (second right), minister of state in the Ministry of National Security; Jamie Russell from the United States Department of State Bureau of International Narcotics and Law Enforcement Affairs; and the five correctional officers from the Department of Correctional Services who participated in the West Virginia-based, mock prison riot 2017.

Correctional officers from Jamaica's Department of Correctional Services joined their colleagues from other countries in a mock, prison riot training course that was held in West Virginia, USA, from April 30 to May 3.

Five officers were engaged in correctional and law enforcement training and exposed to the latest technology used to manage and maintain order inside prisons.

They were accompanied by State Minister in the Ministry of National Security Pearnel Charles Jr and the US Department of State's Bureau of International Narcotics Law Enforcement Affairs representative (INL) Jamie Russell to the event, which is held annually.

"This experience exposed our correctional officers to the latest tactical training and technology in the corrections industry, globally. It offered demonstrations and certification workshops that will enhance the provision of effective prison security and management. We have also expanded our knowledge and network and intend to utilise the suitable products and services to enhance operations in Jamaica," Charles stated, while also expressing thanks to Russell and the INL office in Kingston for the opportunity.

The officers received much-needed training in a number of areas, including the use of non-lethal weapons, self-defence, and inmate-extraction methods, to be applied in instances where inmates refuse to come out of their cells.

Correctional officer and instructor Orrin Lewis from the Carl Rattray Staff College welcomed the opportunity to learn various operating styles from other countries.

"What I like about this experience was that we encountered officers from different countries and were exposed to various styles of how they operate in their prisons. We observed the use of practical control defence techniques to restrain inmates while avoiding injury," said Lewis.

Russell said that for the INL, the big focus was placed on creating safe environments for those in custody.

"My hope is that they took away all the opportunities out there - knowledge of the means and equipment that can be used to not only protect (themselves), but to protect the persons in custody, to treat them fairly and make it a safe environment," she said.