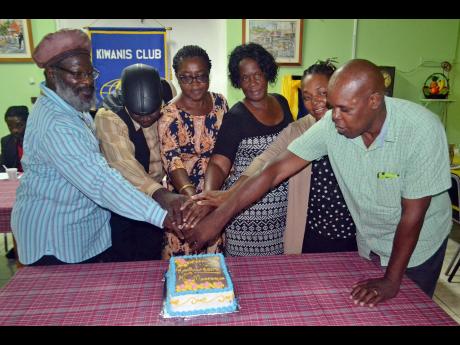 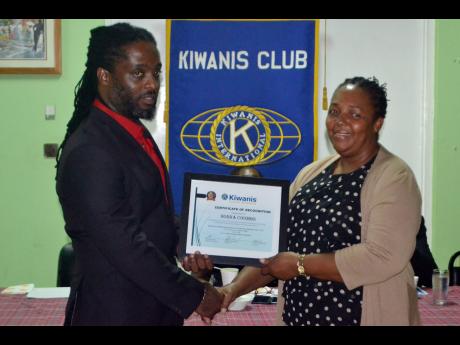 The Kiwanis Club of Moneague in St Ann is celebrating 14 years of sterling service to the community and, at the same time, working to complete its main project by year end.

The club marked the milestone at its regular meeting at Moneague College recently, presenting certificates of recognition and appreciation to several worthy recipients.

Close to 10 visiting Kiwanis clubs, including from as far away as Kingston, shared the occasion and witnessed the ceremonial cutting of the cake to mark the anniversary.

Formed on April 16, 2003 with 26 members, the Kiwanis Club of Monea-gue was committed to fulfilling its purpose and began in earnest under the leadership of President Wesley Barnett.

Over the ensuing years, the club implemented several projects, many of which continue to benefit the various communities that the organisation has reached with its gift of giving.

Some of these projects include erecting a gate at Golden Grove All-age School; building a security booth and re-roofing of a cottage at Moneague Primary and Junior High School; donating water tanks to Mustard Seed Communities; donating a water tank and building a bathroom at Mount Waddy Basic School; and providing desks and chairs to Golden Grove Basic School.

Several beautification programmes were also undertaken, impacting institutions such as Moneague College, Ferncourt High School and Claremont All-Age, among others.

And although the Kiwanis Club's motto is 'Serving the Children of the World', the Moneague club has, nonetheless, extended its service to the elderly by renovating a senior citizen's house in the parish and provided wheelchairs for disabled individuals, among other contributions.

Meanwhile, club president Joseph McKenzie has stated his intention to complete the current project, which is finishing an extension to the Walkerswood Basic School.

"We want to make sure that our project, the Walkerswood Basic School, is completed," McKenzie told Rural Xpress.

"We're doing an extension on the building. I think the Rotary Club of Ocho Rios had actually started the project but didn't complete it. What we intend to do is to finish that project, but not as a project for the Moneague Club only, but for the entire Division 24."

The extension will result in significant increase in space at the school to include classrooms, a staff area and bathroom facilities.

"We're not sure it can be finished this year, but we are trying to get sponsors to make sure it is finished."

The Kiwanis Club of Moneague has also introduced an Adopt-a-Child programme, where directors of the club sponsor students.

"We look at some of the needs they have; like if they need lunch or additional support, we make sure to give them some support," McKenzie said.