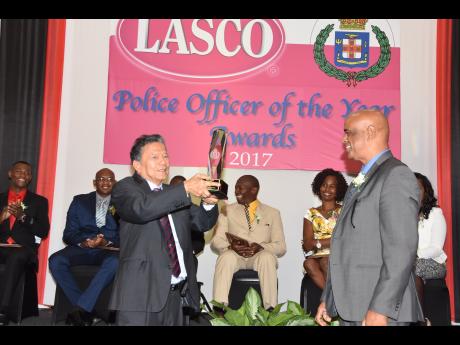 At the LASCO/JCF Police Officer of the Year 2017/18 awards ceremony held recently, newly appointed Commissioner of Police, George Quallo, presented the executive chairman and founder of LASCO, Lascelles Chin with a trophy in symbolic recognition for his outstanding contribution in boosting the morale of members of the Jamaica Constabulary Force (JCF).

"We tip our hats to The Honourable Lascelles Chin. This award programme has been a stable presence in an environment of constant change. You and the LASCO team are an invaluable partner and friend of the JCF and we graciously thank you for your unfailing support and investment in the fight against crime and the development of our members," Quallo said.

The ten finalists showed their appreciation for the support from LASCO Affiliated Companies by presenting a plaque to Chin.

The Police of the Year Awards Programme was initiated in 2000 as a partnership between LASCO and the JCF. The selection process for the LASCO/JCF Police of the Year Award identifies outstanding members from the divisional and area levels before the finalists are selected for the national competition. The finalists then participate in a week of activities to build camaraderie, share experiences, and best practices.

The finalists are then scored on their public speaking skills, through presentations at a luncheon hosted at the LASCO offices. Following this evaluation process, a final panel interview is conducted to select the LASCO Top Cop and the runner-up winners.

POLICE OF THE YEAR

Corporal Stokely Fagan was awarded the Police of the Year 2017/18 title and trophy along with a $250,000 cash prize. Constable Hilette Virgo, who serves within the St James Division, was named first runner-up and awarded $200,000, while Constable Michael Hutchinson of the Mobile Reserve Division took the second runner-up spot and received $100,000.

In his address to attendees of the awards ceremony, Chin spoke to the true significance of programmes like Police Officer of the Year. "These awards go to the heart of who we are at LASCO," declared Chin. "We feel very strongly about the pivotal role of these professionals in the public sector. They impact the social and economic fabric of the nation and touch the lives of the most vulnerable in the society," Chin said.

"Today, LASCO and indeed all well-thinking Jamaicans are standing behind our police officers. We are standing with you and for you," Chin added.