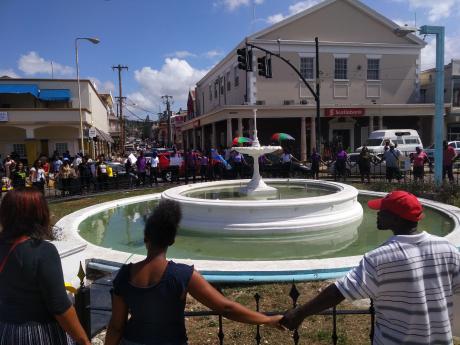 Okoye Henry
Residents of Montego Bay, St James, creating a human chain around the fountain in Sam Sharpe Square in solidarity with families who have lost their loved ones to crime.

With more than 90 murders since the start of this year added to the 268 recorded last year, anxiety and fear are running high in St James.

"The man dem a walk up and down and a kill people like them a bird," said a construction worker, who reportedly witnessed a double murder along the Glendevon main road in the parish last Thursday.

"I have never been this fearful in my 52 years on this earth," added the man who did not give his name.

While expressing his unhappiness with the situation and a desire to see a cessation in the killings, Montego Bay's mayor, Homer Davis, said he is still not convinced of the need for a state of emergency in the parish.

"We know that while there are strong varying views as to whether or not St James should have a state of emergency, it must be noted that it comes with a level of suppression of human rights and trauma that only a certain set of persons will undergo," said Davis.

The mayor, a former cop, believes the best course of action is to speedily put forward the anti-crime plans outlined by Prime Minister Andrew Holness in his Budget presentation.

"It has to be what was announced in Parliament, where you have a particular strategy that was outlined," said Davis.

"The police must take the area, get the necessary social interventions in place, and when that is all done, then proceed with other matters," added Davis.

Deputy Superintendent Gary McKenzie, the chief operations officer for the St James Police Division, told our news team that the cops are on high alert for all serious crimes and are making every effort to clamp down on the lawless.

"Rose Heights, Salt Spring, Quarry and Glendevon are the communities where the police's presence has been more active due to murders and shootings," said McKenzie, who noted that other serious crimes such as rapes, larcenies, robberies and break-ins are on the decline in the parish.

"The police have been doing a number of operations and are carrying out containment activities while simultaneously working with citizens," added McKenzie.

He argued that the fight against crime in St James is a complex matter as the criminal are quite resourceful and have the means to keep arming themselves,

"The police alone will not be able to solve anything. We need the input of everybody in society to arrest crime. Persons need to use the various avenues to communicate with the police," said McKenzie.