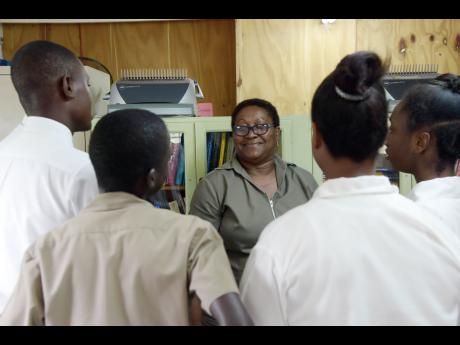 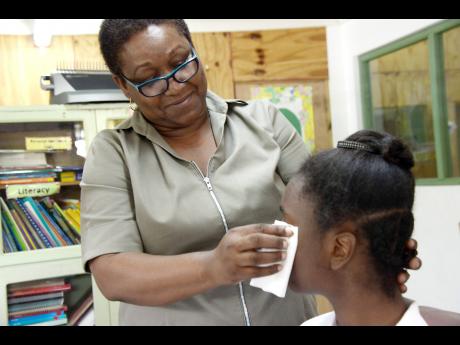 Ian Allen
Principal of Randolph Lopez School of Hope Syllvestina Reid gives help to one of her students. 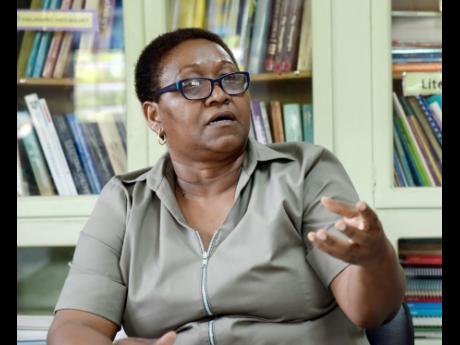 Chezell Morgan is among members of the special-needs community at the Randolph Lopez School of Hope in St Andrew pleading for more to be done to sensitise the society as to how to treat persons, particularly children, with disabilities.

Her voice cracked and tears ran down her cheeks as 17-year-old Chezell relayed some of the discrimination she has experienced even in her own home as a result of ignorance.

"Recently, I told persons that I wanted to join the National Youth Service, but them a say mi can't do it because of my hands and them a doubt me all the while," said Chezell.

"They need to counsel persons who have children with disability so that they know they must treat them like normal children.

"Even at church, some of the people, because you have a physical disability, they don't want to put you upfront with the normal kids. I would like to be on the choir and go to other churches (to sing) and travel more," added Chezell.

She said some of her worst experiences have come during her daily commute, as persons, sometimes with good intentions, often end up causing her hurt because of how insensitive they are.

"It has been hard, especially with taking public bus," said Chezell.

"One of the times my neighbour, who is a family friend, was at the bus stop and a bus came and it was packed and she was looking out for me, but she embarrassed me in a different way. She was saying 'let in the handicap gyal. You don't see say she a go a school'," remembered Chezell.

A visibly upset Chezell told of another instance where persons were occupying seats earmarked for the elderly and disabled on a Jamaica Urban Transit Company (JUTC) bus.

In an effort to get someone to relinquish their seat "somebody said 'why one a yu don't get up and give the handicap gyal a seat'," Chezell recounted between sobs.

"Mi did want to answer, but because mi did have on mi uniform mi never bother."

Chezell is one of the many students at the Randolph Lopez School of Hope not feeling the love this Child Month.

Last week, some of the students told our news team that they particularly dislike taking the JUTC buses allocated for them, as these buses are few in numbers, they take long routes and make several stops, resulting in them getting to school late.

They charged that in the evenings, school ends at 2:30 but the buses don't come until as late as 5 p.m.

"Sometimes they (JUTC buses) don't even pick us up, they just drive pass when we are stopping them," said 15-year-old Marvel Brown, who has been diagnosed with intellectual disability.

Another 15-year-old told our news team that given how students from other schools treat them, she does not make it known that she has an intellectual challenge.

SUGGESTION FOR THE MINISTRY

To remedy the problem, another student, Rayquane Fearon, is recommending that the Ministry of Education send persons to the various schools to talk to students about how they should treat children with disabilities.

"I go through it every day with the students from the other schools. They treat us bad," said the 18-year-old Fearon.

"Sometimes, even when I am at my yard, the kids from the other schools talking that School of Hope is made for handicap children and I have to ask them if the other high schools much better than School of Hope and walk away."

Principal of the school, Syllvestina Reid is, adamant that education is the only way to combat the discrimination faced by children living with disability.

According to Reid, early intervention is needed for parents of disabled children.

"We need intense training for our parents, as to have a child with disability is never easy," Reid told The Sunday Gleaner.

"And that training shouldn't start when the children start school, but once they are identified as having a disability, some training should start with the parents even before they leave the hospital," argued Reid.

The principal is also convinced that public education is the way to go, and she wants the Government to lead this initiative.

Reid argued that the Government has to lead because when her counsellors reach out to other schools to suggest giving talks to the students to sensitise them about how to relate to the disabled, the offer is not taken up.