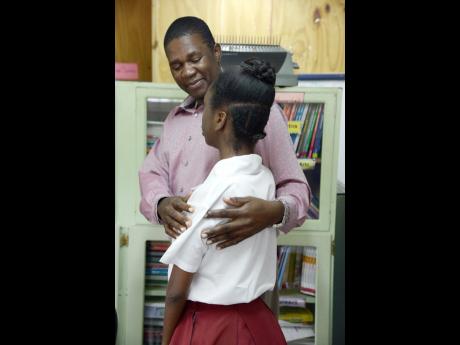 Ian Allen
Counsellor at the Randolph Lopez School of Hope, the Rev Andrew Henry, spends time with one of the students.

Two counsellors who work extensively with the special-needs community are calling for training to be provided for stakeholders and personnel within the various agencies who have to interact with children with disabilities.

Counsellors the Reverend Andrew Henry and Pastor Valerie Blake, who are employed to the Randolph Lopez School of Hope in St Andrew, are worried that too often, special-needs children do not get the attention they need because persons do not have the patience to deal with them.

"The problem is with the service providers. While they have good intentions, because they do not have the training, their offerings are limited," said Henry, who has been working with special-needs children for the last 13 years.

"So there are the child guidance clinics all across the hospitals, the police, doctors and other persons who are stakeholders, but they will say they do not know what to do," added Henry.

For Blake, officers and case workers at the Centre for Investigation of Sexual Offences & Child Abuse (CISOCA) and the Child Development Agency (CDA) have, over the years, shown that they have difficulties in understanding and communicating properly with children with special needs.

"Sometimes we are allowed to observe what they do with our children, and in just observing them, you know that they are not equipped to communicate with them effectively," said Blake.

"The police, too, try their best to facilitate us, but there is still a lack because you don't get a sense that they have an understanding of the levels of challenge or disability that our students face.

"For example, they (police) will ask them (special-needs children) some basic questions and expect a certain level of response, but based on their level of intelligence, you will not get that from them," added Blake.

The counsellors say that they have also been advocating that special-needs bus drivers be trained to understand the basic things about the special-needs population, and for a warden to be placed on each of these buses to monitor the students.

But they have been told by the Jamaica Urban Transit Company that this cannot be done due to economic constraints.

The counsellors are currently trying to mobilise their colleagues from other special-needs schools in the area to formulate a plan with the hope of getting funding from the Jamaican Association On Intellectual Disabilities and the Government to train some of the critical-response personnel.