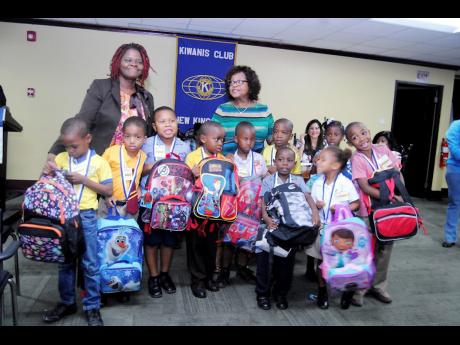 Contributed
Top-10 finalists pose with some of their many prizes. Kiwanians Marilyn Beckford (right) and president, Paulette Kirkland, join them. 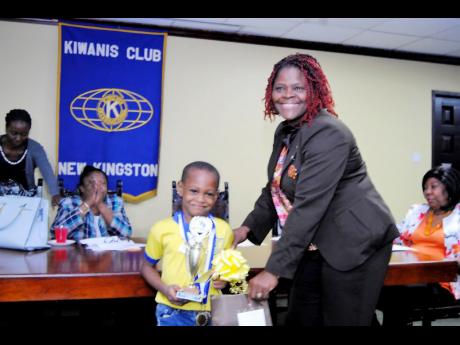 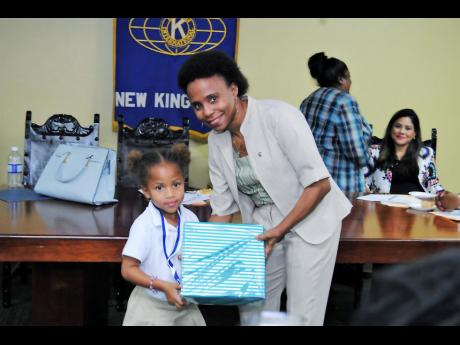 Contributed
Champion girl Lauren Campbell receives one of her prizes from Sandra Davis.
1
2
3

After a nail-biting contest among 10 Corporate Area basic schools, the curtain recently came down on the 15th annual finals of the Kiwanis Club of New Kingston Little Bee Competition.

Traditionally, girls have dominated the competition with a 70:30 ratio of participants in the finals, but this year, for the first time, eight boys and two girls emerged.

The dominance of the boys continued to the end as the champion girl finished sixth overall.

One of the most impactful projects of the Kiwanis Club of New Kingston, the Little Bee Spelling Competition is aimed at improving the spelling and literacy skills of four- and five-year-old children in basic schools.

The project was started in 2002 by the Young Children Priority Committee.

At the launch on March 22, booklets containing the pre-selected words and picture prompts were distributed to the schools for teachers to prepare the children for the competition. The words are selected in collaboration with the Early Childhood Unit of the Ministry of Education so that the appropriate level of efficiency is achieved.

All the children in the schools can, therefore, benefit from the use of these booklets.