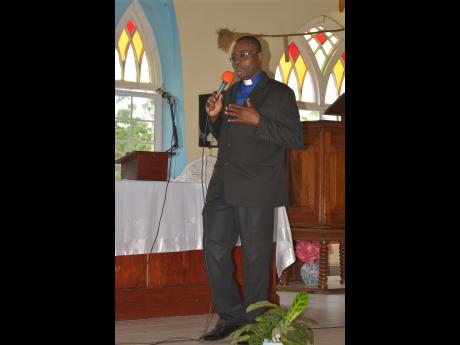 The religious fraternity in Hanover has decided to take the lead in the implementation of social-intervention programmes with a view of making crime less of an option to the youths in that parish.

The Reverend Delroy Harris of the Riverside United Church, which covers several of the communities under the ongoing criminal siege, told The Gleaner that his ministry has undertaken some outreach initiatives and has other activities planned to help curb crime.

"Some of our programmes have not yet come on board, but they will start soon," said Harris.

"One is to do a survey in the communities to see what training areas are needed, and see how we can have some dialogue with HEART to come in and offer such training. We also want to find creative ways to embark on peace initiatives in the community.

"We have our upcoming Family Weekend from June 30 to July 2, which will be held under the theme, 'Heal the family, heal the nation, reclaiming peace in Hanover'," continued Harris. "We are going to be launching this programme and will have a prayer vigil, family fun day and concert. We are going to give people the opportunity to speak about how they see themselves making peace in the community. We want to hear from them."

In mid-April this year, Hanover had the dubious distinction of recording the highest jump in its murder rate, an amazing 26 since the start of the year. In the comparative period in 2016, there were five murders.

Harris said the Jamaica Constabulary Force was integrally involved in the church activities and would also be part of the upcoming Vacation Bible School (VBS), which will have a special programme targeting boys in the communities.

Not leaving out the police

"Everything that we do, we involve the police. I am also the station chaplain for the Kingsvale Police Station, so for the third week in July, we are having Vacation Bible School at all three churches (Riverside, Cacoon and Pell River) at the same time," continued Harris. "I have a team from the United States coming down to help with conducting it.

"What I intend to do in the VBS this year is to have a man-to-man talk with the boys; so we will put them in groups and have some males have some dialogue with them to help them understand positive roles," the pastor said. "So rather than just have the straight Bible talk, we will have man-to-boy; have them talk about their fears, the things they want to engage in, and if we hear the negative things coming out, we bring them back on track."

Businesswoman Hyacinth Shakes-Warren told The Gleaner that although the Hanover Chamber of Commerce is dormant, some of the parish's business operators are still trying to play their individual roles in steering young people from a life of crime.

"The chamber is not very active, but what we do as business persons is we try to employ as many young people as we can," said Shakes-Warren.