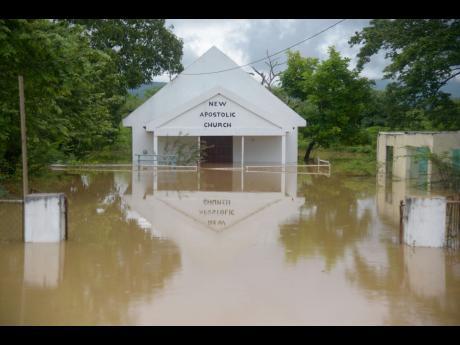 A flooded church in Four Paths, Clarendon on Tuesday.

Stewart, who is a past president of the Incorporated Master Builders Association, says the country lacks a proper design for its drainage solutions.

According to him, a major flaw of Jamaica’s drainage system is the designing of roads to carry water.

He says roads are used as drains to discharge the water in an appropriate drainage channel.

He says in a lot of cases water ends up on land, which does not have any outlet for drainage.

Giving an example of a properly designed drainage system, the engineer pointed to the east-west phase of Highway 2000.

Stewart says the water runs off the roadway to the sides, immediately preventing any build up.

He argued that with a small country like Jamaica, computer technology could be used to come up with a model showing the different intensity of rainfall and then come up with an overall design in relation to an effective drainage system.

While acknowledging that this undertaking would be expensive, Stewart says construction could be done on an ongoing basis.