UPDATE: Why the DPP dropped the charges against Tambourine Army co-founder 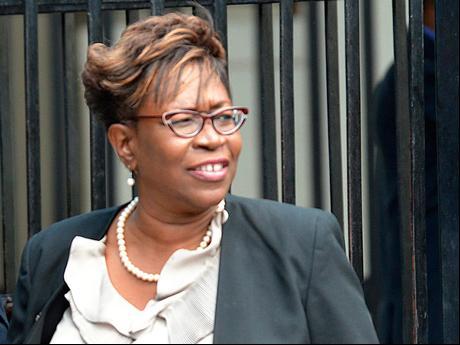 Llewellyn ... prosecutors would be hard-pressed to prove the other elements of the offence as outlined in section 9 of the Cybercrimes Act

The Director of Public Prosecutions (DPP) Paula Lewellyn, has sought to explain why she decided to drop cybercrimes charges against Latoya Nugent, the co-founder of the controversial advocacy group, Tambourine Army.

Nugent was facing three counts of using a computer for malicious communication for allegedly posting information on various social media websites, including Facebook, that were menacing and caused annoyance to three Moravian men.

But after Nugent pleaded not guilty in court today, Llewellyn announced that her office would offer no evidence in the case.

Llewellyn and the deputy head of her Cybercrimes Unit, Yanique Gardener Brown,  have acknowledged that the postings allegedly made by Nugent on social media were offensive and that prosecutors may have been able to prove that they were intentional. However, Llewellyn and Gardener Brown explained that prosecutors would be hard-pressed to prove the other elements of the offence as outlined in section 9 of the Cybercrimes Act.

"In other words, it was offensive but it was not at the level to make it obscene or threatening or menacing," Llewellyn told The Gleaner outside court.

Before indicating to Nugent that she was free to go, the chief parish judge Judith Pusey invoked a popular Jamaican phrase as she urged the women’s right activist to be more responsible in pursuing her cause.

"The same knife that stick sheep, stick goat. I urge you to consider seriously what you put out there," said Pusey, warning that reputations built up over many years can be swiftly destroyed.

Outside the courtroom, Nugent insisted that her advocacy work will continue, but indicated she was prepared to revise her methods.

"I may have to change how I do what I do, but the advocacy will certainly continue," she told The Gleaner.