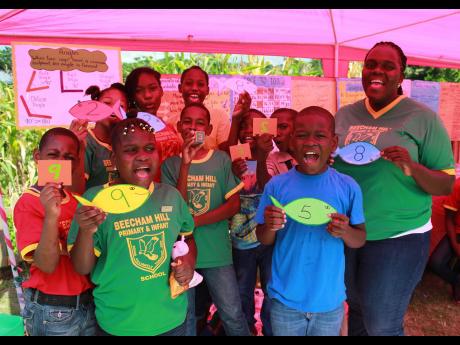 Bankers, retailers, and teachers got together last week to take part in an innovative maths project that aimed to improve child numeracy rates in a deep rural community in central St Mary.

Last Friday, representatives from Courts, the National Commercial Bank (NCB), and the Ministry of Education journeyed to Beecham Hill Primary and Infant School in Flint River to speak with students about sums, and introduce them to concepts such as loans, interest, and savings.

According to the school's numeracy coordinator, Cyreta Henry, a disproportionately large number of children are afraid of mathematics, so staff and parents decided to host a numeracy fair to help address the problem.

She told Rural Xpress: "Even from primary school, people are generally uncomfortable with maths, and if you look at the way our generation was taught, there was no fun. Maths was complicated so we grow up with a fear, which we pass on to the students, who then exhibit that fear.

"Over time, we have seen where the students' performance in numeracy has been low, which I think stems from a lack of understanding and enjoyment, so we decided to host the numeracy fair to show the fun part of maths. We tried to break down the strands of mathematics by organising games and activities, but leaving out the complicated parts so the children were able to play, understand, and enjoy themselves at the same time.

"We try to promote maths in such a way where, instead of giving students worksheets with 20 maths questions and saying: 'Look here, work out this,' we do it in a fun way and say: 'OK, we're going to have a race and the first person to complete these 20 questions gets a prize.' Then, you'll see they start to work harder because they are encouraged and motivated."

Henry, who also teaches grades five and six, believes the fair's impact on the children will be long-lasting, and encouraged parents to introduce their children to maths through simple practices such as shopping.

"Today, students from Camberwell and Zion Hill primary schools came to participate in a competition where they made jingles about maths, and later we'll be having a maths race and a balloon pop. Courts were here earlier giving away prizes and asking students about percentages and hire purchases, and we also had representatives from the NCB who spoke about money and allowed them to open accounts.

"For parents who want to introduce their children to maths, I would say to start from the simplest point and allow them to spend money. You know they always want things when you go to the supermarket. So explain to them: 'This item costs $500 and I have $1,000. How much change will I get back?' Allow them to spend and interact with things so they know for themselves. That will make them more comfortable and after a while, you will notice the students start teaching the parents how to do things."