Tarmarsha Palmer - Challenged but not limited 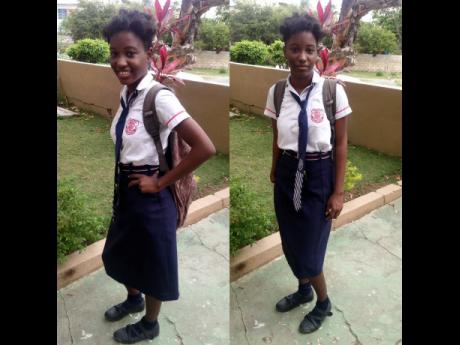 Tarmarsha Palmer, 16, may be physically challenged but that's where her limitations stop. With her hopes and aspirations set on someday being a lecturer, the only thing standing in the way of her dream is staying in school and getting the aid she needs.

She was described by the Bridgeport High School's dean of discipline, Sigvard Bailey as a "very ambitious, determined young lady". He had nothing but high praises for her.

"Considering her circumstances, her grades are pretty impressive," he said of Palmer who, through a birth defect, has no wrist on one hand. He said she has managed to pass most of her subjects.

Living with her grandmother, Juliet Angella Rhooms, the teenager is on the Programme of Advancement through Health and Education (PATH), which secures her meals from Mondays to Wednesdays. However, for the other two days her grandmother cannot come up with the lunch money, and getting her school supplies is also a major challenge.

"There are times when she gets assistance from her aunt, but she has her own family and she doesn't have the financial resources to help her all the time. Her mother and father broke up," Rhooms explained to Rural Xpress.

With Palmer's mother now living "in the country", her grandmother, a breast cancer survivor, has also taken in Palmer's two other siblings - her 14-year-old sister and 10-year-old brother.

"It is very hard. I have a malignant breast cancer (stage four) and I did an operation in 2013. My husband is diabetic and has high blood pressure," her grandmother shared.

It pains her that she cannot give her grandchildren the kind of care they need.

The school's dean is making a special appeal for Palmer as he said if she receives the right kind of assistance, she has the potential to go far.

"When I met her she was in grade eight. It was a case of her not having her book, but with the help of the guidance counselor we saw her through the process," he said. It was during this time that he soon realised the many challenges she was facing.

Bailey said he reached out to past students who tried to assist, especially Rudolph Thomas, but now he said they can't go any further, as they have their own needs to deal with.

"She needs more help than they can give now, more than what I can mobilise. I would love a 'big sister' to be involved in her life so they can mentor her. She also needs help to stay in school and I know she is concerned about her younger siblings," said Bailey.

As for Palmer, she is looking forward to the day when she can excel in her studies and finally be able to help her grandmother who has been a rock to her.

For those wishing to help Tamarsha, her grandmother Angella Rhooms can be contacted at 876-306-2232.