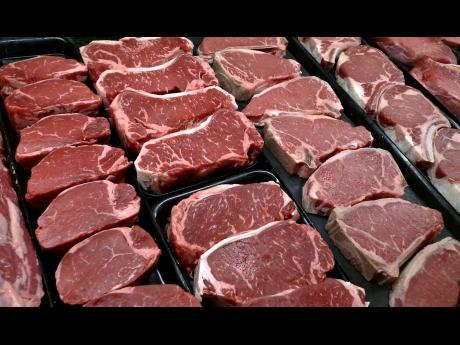 Eight persons were arrested by the police in Trelawny yesterday during a crackdown on meat shops suspected of being in breaches of the Public Health Act.

The police have not released their names.

The police Praedial Larceny Unit reports that three of the eight persons were arrested for failing to produce public health certificates during operations that were carried out at several meat shops in the parish capital of Falmouth.

According to the police, the others were arrested inside the Falmouth meat market for not having a butcher’s license and a food handler’s permit.

The eight-hour operations were conducted jointly with Public Health inspectors.

Head of the praedial larceny unit, Deputy Superintendent Kevin Francis says the police will be unrelenting in their efforts to enforce the regulations dealing with food safety and security.

Meanwhile, the police in Trelawny recorded two more murders yesterday, bringing to four the number of persons killed in the parish this week.

The latest victims are 24-year-old auto-technician Shamar Williams and 19-year-old Mekieda Waldoo, both from the community of Clark’s Town.

It’s reported that Williams and Waldoo left their home in a motorcar shortly before 10 o’clock last night to purchase food.

The police say upon returning home, they were ambushed and shot several times.

A police team that was quickly on the scene found both bodies in the front of the car with several gunshot wounds.

On Tuesday, taxi operator Dwayne Marrett was shot and killed by unknown assailants in the parish capital of Falmouth.

A day later, Hyacinthia Wright, the widow of the former Mayor of Falmouth, Joseph Wright, had her throat slashed by unknown assailants.