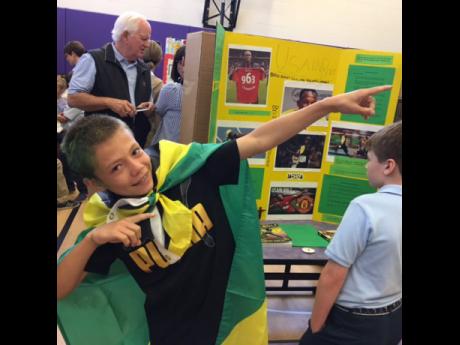 Contributed
Twelve-year-old Jonathan Middleton of Texas in the United States in his full Jamaican get-up.

When 12-year-old Jonathan Middleton of Texas in the United States was asked to prepare a presentation for his school's history fair and 'wax museum', there was no question that his project would feature his favourite runner, Jamaican sprint legend Usain Bolt.

Middleton, the son of two university professors - his father a lecturer in religion and literature at Texas Christian University - loves everything Jamaican, and when his social studies teacher announced the assignment last month, he whipped out his Jamaican flag, spray paint and best Jamaican accent to woo his classmates.

COMING TO LIFE AS BOLT

"Everyone loved his project at school. He was required to complete a research paper, give a three- to five-minute speech and prepare a display board.

"He also had to dress as his character and participate in a 'wax museum'," said Jonathan's social studies teacher, Neely Douglas of Starpoint, the laboratory school of the Texas Christian University.

"When visitors came to the museum, they pushed a button at his display. Jonathan then came to life as Usain Bolt, telling a brief synopsis of his life. He then answered questions from visitors. He received an 'A' for his project, the highest grade I give."

The youngster dreams of visiting Jamaica and meeting Bolt, and after his dad posted images of his project on social media, they went viral, even getting the nod of approval from the sprint superstar himself, who retweeted Jonathan's achievement.

"Bolt had seen Jonathan's project on his Twitter feed. He gave his own shout out, 'Brilliant,' accompanied by golden clapping hand emojis. Jonathan was fast asleep at this point," an elated Darren Middleton, Jonathan's father, told The Sunday Gleaner last week.

"But I will never forget his morning joy the next day. His school friends were thrilled. And his teachers were so proud. After all, Bolt's response was the best lesson."

The elder Middleton said his son, since birth, has always been exposed to Jamaican culture because of his parents' jobs.

He has been hearing about Rastafari and reggae music from an early age; however, he was enthralled by Bolt's performance at the Rio Olympics. The family plans to visit the island soon.