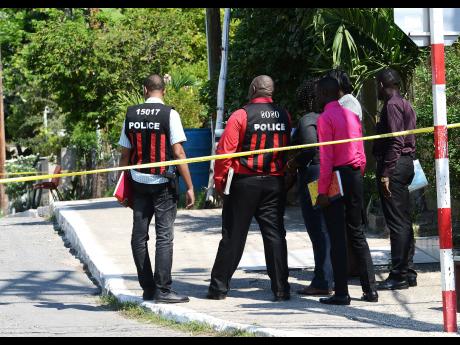 File
Police investigators at the scene of a recent fatal shooting in the Corporate Area.

The Caribbean region, including Jamaica, is rightfully known for its beauty, warmth, culture, music and beckoning beaches. But a darker reality lurks - the region is home to some of the world's highest violent crime rates.

You need good data to prevent violence. When the police and other agencies have access to reliable numbers, policymakers can construct programmes that work.

In fact, every city that has succeeded in dramatically reducing crime in recent decades - from New York City to Bogota - has implemented programmes with a data component attached.

For too long, crime data in Jamaica and the rest of the region has been inadequate. This is not necessarily because governments have the data but are reluctant to release it. Often, statistical agencies have institutional weaknesses, and many people do not trust the police to report crimes. This is a problem that afflicts many countries, not just Caribbean ones.

The good news is that in recent years, with the support of the Inter-American Development Bank (IDB), Jamaica, The Bahamas, Barbados, Suriname, and Trinidad and Tobago have carried out detailed crime victimisation surveys.

The IDB has just published the results in its book, Restoring Paradise in the Caribbean, Combating Violence with Numbers. The surveys shed light not only on the prevalence of crime but its unique characteristics when compared to other regions.

Non-violent property crimes in the islands are low. The average rate of individuals victimised by theft of personal property, in a 12-month period, in the Caribbean is 4.8 per cent. This is below global averages.

Violent crime rates, on the other hand, are among the highest in the world. The average rate of victimisation by assault and threat (6.8 per cent) is higher than in any other world region, including Latin America. Guns are used about twice as often in robberies and three times as often in assault in the Caribbean, as compared with the global average.

In the Kingston Metropolitan Area, nearly half of the survey of respondents reported having lost someone close to violence in their lifetime. A full 42 per cent reported having witnessed a serious attack, shooting, or beating that resulted in injury or murder.

Crime is also expensive. An earlier study estimated that crime in Jamaica costs four per cent of its GDP, among the highest in Latin America and the Caribbean.

The IDB victimisation surveys also found that violence is concentrated in certain neighbourhoods and demographic groups, often far away from tourist resorts.

We found that certain vulnerable populations who are repeatedly victimised, particularly poor young males, and crime is focused. Assault in Kingston happens 82 per cent of the time in the victim's own home or in the neighbourhood.

Violence in homes is troubling. Nearly a third of Jamaicans would approve or understand physically punishing a wife if she was unfaithful, and 84 per cent believe it is necessary to physically punish children. Research shows this kind of violence predicts later perpetration.

What can be done? Jamaica and other Caribbean countries need to redirect anti-crime efforts in favour of more interventions that are evidence-based and targeted at high-risk individuals and geographic areas, with improved monitoring of police and justice systems.

The report identifies key areas of intervention, from better policing practices and criminal justice system reforms to policies that deal with gangs.

While the report notes there is limited data available on the capacity of judicial and corrections systems, there are indications that limited budgets, capacity and increasing caseloads have led to long case backlogs, large numbers of pretrial detentions and prison overcrowding.

Good data leads to good policies, and victimisation surveys are a critical diagnostic tool. They should not be used to score political points. Rather, they are important navigational maps that will properly steer future programmes.

Jamaica and its Caribbean neighbours occupy a precious piece of paradise. Using these data tools as a road map to a better future, the Caribbean can become a safer, happier, and more prosperous region.

- Ana Maria Rodriguez is manager of the IDB's Institutions for Development Department and Therese Turner-Jones manages the Caribbean Country Department at the IDB. Feedback: editorial@gleanerjm.com