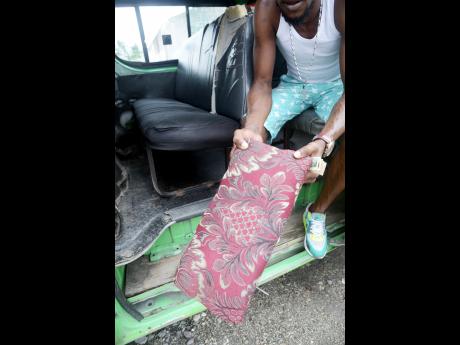 Norman Grindley
A conductor displays one of the ‘cross seats’ used in his minibus. 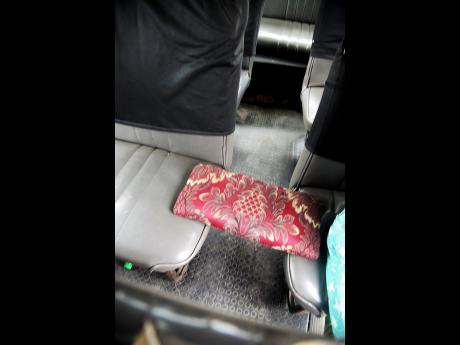 Confusion shrouds the legality of makeshift seats placed in the aisles of some public passenger vehicles, with neither the police nor the transport authorities seemingly clear as to whether they are allowed.

The seats, dubbed 'cross seats', are used by operators of some public passenger vehicles to ensure more passengers board their buses, but people who opt to sit there could be putting themselves at risk.

"The cross seats that are put into the vehicles to allow more people to sit [are] not a part of what was built in the vehicle, and so it is certainly not safe," Senior Superintendent Calvin Allen, head of the Police Traffic Division, told The Sunday Gleaner.

"What are safe are those seats that are designed by the manufacturers. The cross seats are definitely not safe for use, and are not recommended. We want people to understand that clearly," added Allen.

The police traffic boss refused to say what actions the police are taking against bus operators who flout safety standards. But one junior member of the force told our news team, that the cross seats - sometimes just pieces of board wrapped with sponge and fabric - are often overlooked by cops who have given in to the bus operators desperate to earn an additional dollar.

"If we don't use the cross seats we can't make any money. Trust me. You have some bus a 12-seater and some bus carry 15 passengers, that should work out to $1,500 per trip without the cross seats. Sometime the bus full and you don't even make half of that," said Kemar, a bus conductor on the downtown to Seaview Gardens route.

"So we have to use the cross seat dem. Even if the passengers pay you $50 and you have four cross seats, that is $200 more you are making on your money, 'cause most people just refuse to pay the $100 for them bus fares," added Kemar.

Superintendent Radcliffe Lewis, said this was an issue he had to deal with a few years ago.

"They (cross seats) are still prevalent. They are still being used and it should not be," said Lewis, who is now the revenue protection manager at the state-owned Jamaica Urban Transit Company (JUTC).

He argued that the cross seats block the aisles and hinders passengers' easy escape should an emergency occur in the vehicle.

Lewis agreed that most cops turn a blind eye to the safety risks posed by the cross seats, but said the JUTC will not hesitate to take action against its franchise operators who are found using them.

"Our franchise operators must abide by the rules and regulations. We are responsible for the franchise buses and we monitor them along with the police," said Lewis.

Seating capacity for public passenger vehicles are determined by the Island Traffic Authority and enforced by the Transport Authority.

When our news team checked, representatives of the two agencies pointed fingers at each other regarding the appropriateness of the seats, and whether passengers who use them are covered by insurance.

In the meantime, Orville Johnson, executive director of the Insurance Association of Jamaica, said the insurance companies are guided by the seating capacity presented by the bus owners.