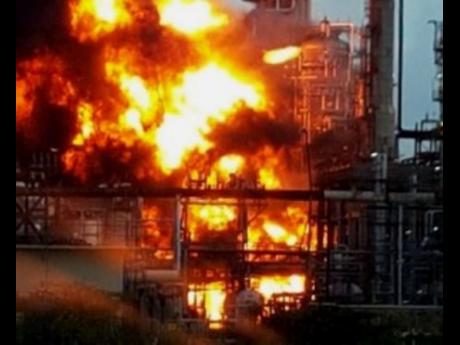 WILLEMSTAD, Curaçao, CMC – Venezuelan authorities are investigating the cause of a massive fire that occurred early today at the Isla oil refinery here.

The fire at the facility, run by Venezuelan state oil company Petroleos de Venezuela SA (PDVSA), broke out at one of the refinery’s crude distillation units.

President of PDVSA Eulogio del Pino, confirmed on Twitter that the fire was out, adding that there were no injuries.

He also said an investigative committee had been formed.

PDVSA’s reliance on Isla has increased this year since the refinery restarted operations after a planned major maintenance program.

According to sources, the refinery has been operating  at around 50 per cent.

PDVSA has for decades operated the refinery, which opened in 1918, under a lease agreement.

However in 2016, the government of Curacao signed a preliminary agreement with China’s Guangdong Zhenrong Energy to operate the aging refinery and invest US$10 billion in upgrading the facility.