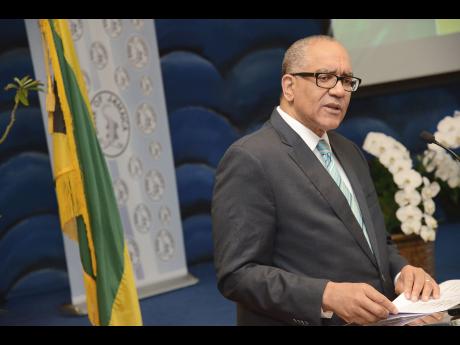 Governor of the Bank of Jamaica Brian Wynter says that while challenges remain, the business climate in Jamaica is conducive to attracting increased private-sector investment.

"We need all our entrepreneurs to see it, understand it, and believe it. We need for them to believe it will last and to also have the faith to start investing or to invest even more," Wynter said.

He was addressing journalists and members of the business community during a media briefing held at the Hilton Rose Hall Hotel in Montego Bay, St James, last Friday.

Wynter said he fully expects the Montego Bay business community to grasp and appreciate the moment, considering that the city, once the poorest part of the island, was built on faith.

He cited successful risk takers, such as Jamaican hotelier, Gordon 'Butch' Stewart, and entrepreneur, Tony Hart, who was responsible for starting the Montego Freeport industrial hub in 1967.

"When American Oscar Hammerstein wrote the famous words... for the iconic musical, the Sound of Music in 1959, he was staying at his Jamaican property, Highland House, right here in Montego Bay. Now, in 2017, the hills are reverberating with the rhythms of economic possibilities because Jamaica is no longer a long shot; it is now the smart money," Wynter stated.

In the 2016 Doing Business Report of the World Bank, Jamaica was named among the 10 most improved economies for doing business in the world.