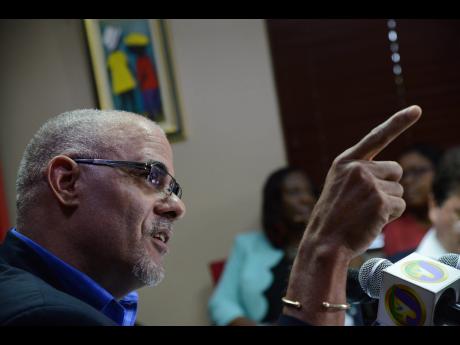 Economic Programme Oversight Committee (EPOC) Co-Chairman Keith Duncan is proposing that the Government analyse the overperformance in tax revenue inflows recorded for the 2016-17 fiscal year to determine the underlying factors driving this outcome.

This, he said, should be done to ensure that this out-turn can be sustained over the long term.

This enabled the administration to generate a primary balance surplus of $135.9 billion.

This was $12.9 billion or 7.7 per cent above the minimum seven per cent target of $123 billion for the period, in keeping with target stipulations under the International Monetary Fund's precautionary three-year standby agreement.

These, along with the containment of the rate of inflation, which came in at 4.1 per cent to be within the target range of two to nine per cent, and further reduction in the unemployment rate, which declined by 0.6 per cent to 12.7 per cent in January relative to the corresponding period in 2016, were among the key fiscal and monetary quantitative performance criteria for 2016-17 under the Government's IMF-supported economic reform programme.

"So Jamaica, from a quantitative perspective, is performing significantly well; the selected fiscal and monetary indicators have been met and surpassed in a significant way. The tax revenue intakes continue to be strong, where the overperformance was driven by improved compliance, higher levels of company profits, and an increased country wage bill reflective of higher levels of employment," the EPOC co-chairman stated.

Duncan said the buoyant revenue inflows were "not surprising", given recent fiscal developments.

These, he noted, include the shift from direct to indirect taxation; increased macroeconomic stability and economic growth; and increased company profits. He, however, believes there may be other underlying factors.

In this regard, Duncan emphasised that "there needs to be further and deeper analysis done by the Ministry of Finance around these numbers so we really can get to the underlying reasons for the movement and buoyancy so that, hopefully, this can be sustained."

"We really need to get the handle on it, because we would like to ensure that there is some sustainability to this; because this would help us to create room in our fiscal space going forward," he added.