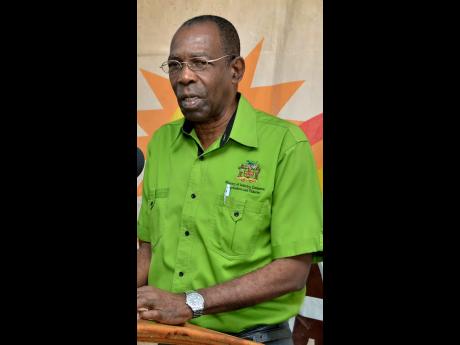 Yhomo Hutchinson
Minister without portfolio in the Ministry of Industry, Commerce, Agriculture and Fisheries J.C. Hutchinson.

The Government is set to roll out a Scotch bonnet pepper programme in north east Manchester in the next few weeks.

This was announced by minister without portfolio in the Ministry of Industry, Commerce, Agriculture and Fisheries, J.C. Hutchinson, during a meeting with Irish potato farmers at the Restore Pentecostal Church in Devon, Manchester, last week.

He explained that the pepper programme will be similar in structure to the National Irish Potato Programme in that farmers will receive seedlings and other inputs up front, with payments being made when crops are reaped.

"I consider this area as the hub, where there is good climate and it has the greenhouses that will be utilised for distribution of pepper seedlings to farmers in a similar way to what obtains for the Irish potato and onion programme," Hutchinson said.

The minister said farmers will have to be a member of an organisation, under the umbrella of the Rural Agricultural Development Authority (RADA), to benefit from the initiative.

"All the farmers would need to find is the labour. The ministry would also help with securing markets for the produce and after reaping, all input costs would be subtracted and they would get the profits," he said.

He said the Government has some 5,000 acres of farmland in south Manchester.

"Where there are idle, government-owned lands, we will put farmers on it to work. We are dedicated to seeing that all struggling farmers get a push-start, and providing the basic inputs that will help them become productive individuals," Hutchinson said.