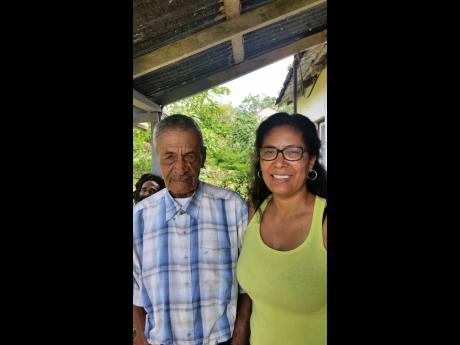 In Preston (Oriente), Cuba, Lloyd George Heholt became the first of 10 children for William and Florence Heholt, but his childhood days in Cuba was interrupted by political upheavals.

His parents took him and his sister Shirley to Jamaica, where the family resided in Retirement, Watt Town, St Ann.

There, he attended Retirement School.

In 1953, his parents moved to Homestead, Bamboo, in the same parish. Eight children were eventually added to the family, whose father was a carpenter. Lloyd became a carpenter's apprentice at a very young age, and evolved into a meticulous carpenter himself.

In 1955, Lloyd married Joyce McDonald, with whom he produced four children - Christopher, Jennifer, Christine and Sharon. But, nine years after his wedding, his beloved Joyce passed away. He was left devastated. Yet, the support he got from in-laws, family and friends kept him going.

After the death of his father in 1977, he went back to Homestead to live with his mother.

Apart from being a carpenter, Lloyd was also a roofing specialist, and worked in Kingston as a contractor to various roofing companies, including Associate Traders Limited.

He was a very skilled and hard-working man, who spent the most peaceful days of his life doing private carpentry work in his backyard at Homestead, where many homes benefited from his skills.

Some years ago, the scourge of cancer started to consume his being, but through it all Lloyd maintained his sense of humour, did not complain much, and carried on with his life.

But, at the start of this year, his health began to deteriorate. There was to be no improvement, and on Easter Sunday, April 16, Lloyd George Heholt closed his eyes in eternal rest.

The devout Catholic, who attended the Holy Name of Jesus Catholic Church at Homestead, was interred in the church cemetery on April 29.

He is remembered as a kind, loving, generous, humorous, entertaining and hospitable "spirit", whose life will always be cherished by his four children, nine grandchildren, one great-grandchild, two brothers, four sisters, nieces, nephews, other relatives and friends.