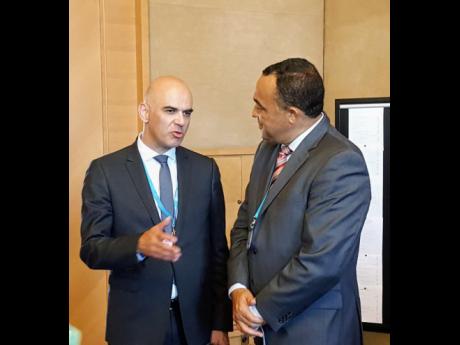 The impact of non-communicable diseases (NCDs) on the region, and Jamaica's response with the 'Jamaica Moves' initiative were the focus of chief medical officer Dr Winston De La Haye's presentation on Sunday at the Annual Commonwealth Health Ministers Meeting being held in Geneva, Switzerland.

De La Haye pointed out that NCDs are a leading public health threat in Jamaica and in the past 10 years, there has been an increase in the prevalence of NCDs and related deaths.

In 2014, preliminary data revealed that NCDs, specifically cardiovascular diseases, cancer, diabetes, chronic respiratory disease and diabetes, accounted for 68 per cent of all deaths in the country. The survey further revealed that by 2030 the prevalence of diabetes among persons between ages 15-74 years is expected to increase by 47 per cent.

"It is projected that many of the people who will die from NCDs in the next 20 years will be today's young to middle-age adults. As it is, we are starting our journey towards curbing the trend of avoidable, untimely deaths and the high public health costs caused by NCDs," De La Haye said.

In April, on World Health Day, the Ministry of Health launched 'Jamaica Moves' - the country's coordinated national response to the increased incidences of NCDs. Through education, engagement and the building of supportive environments, the programme hopes to reduce NCDs by 25 per cent by the year 2025.

"Physical inactivity has a major health impact on the world and the elimination of physical inactivity would remove between six to 10 per cent of these major NCDs and increase life expectancy," De La Haye noted.

This has become increasingly important, given that approximately 70 per cent of deaths in Jamaica are due to the four major NCDs - coronary heart disease, type 2 diabetes, breast and colon cancers, with 35 per cent of these deaths occurring below age 70 (premature).

To date, the Jamaica Moves programme has been gaining national attention since its launch. The programme, which recently concluded its 'Get Moving' Challenge, will branch out to corporate companies and communities in June through its all-island tour.