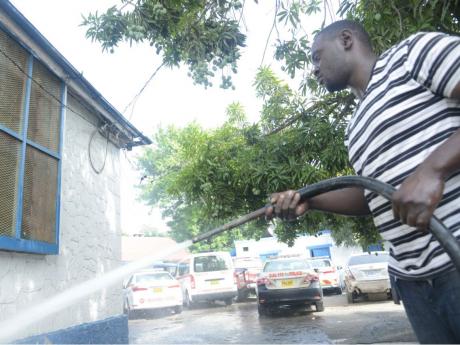 This worker from China Harbour Engineering washes the wall at the Ferry Police station St Catherine before painting. Superintendent Preston Wray of the Police Highway Patrol said he was happy for the project - Norman Grindley photo

Jamaicans are being encouraged to go out and clean up their communities today, Labour Day, being recognised under the theme ‘Restore, Preserve, Beautify’.

Labour Day coincides with the aftermath of the heavy rains that damaged several infrastructure primarily in Clarendon and St Catherine.

The two national projects will involve the refurbishing of the Ward Theatre and the Central Police station in Kingston.

The Prime Minister Andrew Holness and Opposition Leader Dr Peter Phillips in their Labour Day messages urged Jamaicans to unite and work together.

HOLNESS:
On this Labour Day we remember those whose examples of courage fortify our spirit and we recognise those who display that same courage today.

I have seen it in action during the recent flood rains. Jermaine and Jamauno Riley and their friend Ramone Peart of Sunnyside, St. Catherine, have shown the true spirit of courage and community, rescuing their neighbours, from ravishing flood waters, in their time of greatest need.

As a people we salute them. Together, we have a duty to reach out to our neighbours, and those in our communities as they put their lives and properties back together.

The thrust of the Government’s Economic Policy is to advance the welfare of our workers and to improve people’s standard of living. In January, this year there were nearly 22,000 more persons employed than there were in January 2016. Unemployment today is lower than it was a year ago.

We are opening up more employment opportunities to our people. I recently announced the Housing, Opportunity, Production and Employment (HOPE) programme which aims to provide employment to some 15,000 of our unattached, at-risk young people.

There are significant employment opportunities opening up in the BPO sector, in Tourism and in the Mining Sector; we are expecting an additional 3,000 persons to be employed as a result of some $2 billion in investments being poured into that sector.

Employment in our Special Economic Zones and Logistics-centered activities will further boost employment.

On this Labour Day, workers can have confidence that they have a bright future and that things are aligning in their interests. Last year, the economy grew by 1.4 per cent, the highest in four years. Workers benefit when the economy grows. Economic stagnation hurts workers.

The fact that we are having historically low inflation rates is also a significant benefit to workers. That there has been a 14.8 per cent expansion in bank credit to the private sector in 2016 compared to 9.6 per cent in 2015 is a plus for workers’ interests. The interests of workers have also been advanced by initiatives the Government has taken in health care and education.

We recognise that to keep faithful to the mandate of the workers movement which blossomed in the 1930s, we have to put in much work today. As heirs of National Heroes Sir Alexander Bustamante and Norman Washington Manley, we can do no less.

PHILLIPS:
Labour Day 2017, provides us with the opportunity to once again honour and celebrate the tremendous contribution of the workers of Jamaica to national development.

We must never forget that in 1938 it was the collective protest of the Jamaican workers against the appalling economic and social conditions of colonial society that set the stage for the emergence of organised trade unions, and set the foundations of our modern day political arrangements which laid claim to Jamaica's independence.

Let us forever remember that Jamaica's survival in today's global economy is due primarily to the efforts of our workers.

Every day thousands of Jamaican workers in Agriculture; in Tourism; in our factories and stores and our call centres; as well as the members of our security personnel; bus and taxi drivers; Teachers; Nurses; Civil Servants and numerous others, keep Jamaica functioning.

We pay tribute as well to the workers in the Financial Services, the music industry and other service providers.

They provide the services that are essential to our survival as a Country and many earn the foreign exchange that keeps our economy afloat.

Without our workers and their efforts we would not exist as a viable country and a vibrant society.

The denial of the representation rights of workers in some sectors of the economy, and the spread of the practise of employing workers under the guise that they are independent contractors, are among the things having the effect of limiting the fundamental rights of workers and reducing their benefits, including pension benefits.

Jamaica's future as a society that affords equal opportunity to all its people, will forever be enhanced by the energy and activism of a strong Trade Union Movement.

With this in mind, let us take time out this Labour Day, to celebrate our workers, by putting work into Labour Day. Equally, let us rededicate ourselves to the historic objectives of the Labour Movement, which is to build a Jamaica that works for all the people.