There is wealth in our culture - PM 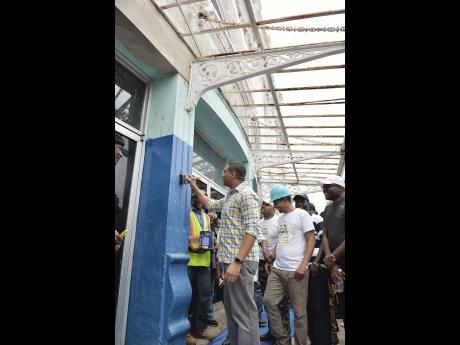 Prime Minister Andrew Holness (second left) paints a section of a wall at Ward Theatre in downtown Kingston on Labour Day, as part of activities to restore the 105-year-old monument. Also pictured are Mayor of Kingston and St Andrew, Councillor Delroy Williams (third right); Town Clerk Robert Hill (fourth right); and head of communications at the Office of the Prime Minister, Robert Nesta Morgan (right). The Ward Theatre was one of two National Labour Day projects.

Speaking at the Ward Theatre in downtown Kingston on Tuesday, the site of one of two National Labour Day projects, Prime Minister Andrew Holness said that when culture gets sidelined because of social issues, it is often left to be destroyed.

He added that Jamaicans cannot allow this monument of the country's culture and storage of heritage to be destroyed.

Prior to its falling into disrepair, the Ward Theatre was the epicentre for the development of Jamaican theatrical activity since 1912.

The prime minister also visited the Central Police Station, which was the second national project. He said the project was significant to the government's push to improve safety and security.

"Having this as a national Labour Day project is symbolic. The people have come out to restore and rebuild and preserve the physical symbol of law enforcement," stated the prime minister.

Holness added that the government is working assiduously to develop a framework for a new piece of legislation, which will redefine the police force by November of this year.

"The use of our labour is not to oppose and resist and tear down ourselves, it is to work together constructively to use our labour, our energy, our industry, our enterprise for the constructive development of our country, Jamaica," declared Holness.

The 2017 National Labour day activities were held under the theme, 'Preserve, Restore and Beautify'.