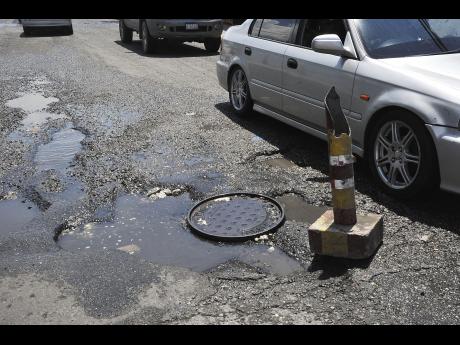 Norman Grindley
The problematic North Street in Kingston – in the vicinity of St George’s College, where, at one point, raw sewage overflowed on to the main thoroughfare.

It will cost the National Water Commission (NWC) over US$200 million for rehabilitation work on both the sewer and water networks across downtown Kingston, according to a statement from the entity. It said the hefty sum was necessary to firmly correct the malfunctioning, older system currently in place across the Corporate Area.

"The rehabilitation of both sewer and water network preliminary estimates will run us more than US$200 million," noted a communique from Karen Williams, NWC's senior communications manager. She added that the company was exploring various options to fund the project.

In March, Dr Horace Chang, minister with responsibility for water, environment and housing, said that fixing the decades-old issue would mean raising several million dollars and that the Government had already started the process of sourcing the funds.

"Once the funds are found, work of this magnitude could last up to two years," Williams said.

Approximately $36 million have already been spent on rehabilitation work on a section of North Street, which was supposed to have corrected the over 10-year problem of raw sewage overflowing onto the major thoroughfare in the vicinity of St George's College.

However, it will require a complete overhauling of the current network of sewage pipe to correct the problem that has long plagued residents, businesses and commuters.

"This means replacing mains stretching from North Street to Spanish Town Road in order to be joined onto the Soapberry line for lifting," Chang told The Gleaner back in March.

Several communities across metropolitan Kingston, including in the western and central areas, as well as the always busy commercial and market districts, going as far as South St Andrew, are affected on a daily basis, with some residents having to contend with the stench of raw sewage flowing openly.

Residents in a number of these communities have been complaining of possible health risks and have warned of a potential outbreak of water-borne diseases if the matter is not dealt with urgently.