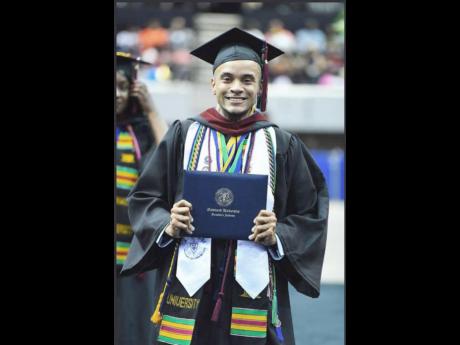 He had big dreams. Failure was not an option for him, but somehow, the life he wanted seemed unrealistic and unattainable. How could this young man from Mandeville, Manchester, pack up and leave for a university thousands of miles away with only a few dollars to his name?

Well, he had no idea where the staircase would lead him, but he knew he had to make that first step.

"I hit what some might call a plateau. I worked in Jamaican media as a radio and television host for the better part of five years, but I lost the feeling of fulfilment I had when I just began. I wasn't doing well in school, and I did not believe that I was where I needed to be. I wanted more. I had a number of friends who were pursuing their degrees abroad, and one of them, knowing well of my dreams to attend Oakwood University, encouraged me to do same," K. Dominic McKenzie told Rural Xpress.

A transition he thought would have been much easier proved to be one so tedious, he almost threw in the towel.

" ... Relocating was a difficult task. It had been an uphill struggle from the beginning, but I was adamant that I would see it through to the end. The paperwork I needed to go to the embassy only arrived in the country a week prior to the date I was scheduled to leave the island. I wasn't able to request a visa appointment without a number that was provided on that document either," he shared.

McKenzie continued: "I then proceeded to apply for the interview. The response I got was less than desirable. The only appointment date available was after the date I needed to be in the US. I called the embassy on Tuesday, August 13, 2013 and the operator instructed me to send an email requesting an emergency interview,"said McKenzie.

He believes this move was ordained, as what should have been a four to five business day wait for a response ended up being less than 24 hours. But this was just the beginning of a seemingly unending period of frustration.

"When I arrived In the US, I had nowhere to stay. I had to call up a former schoolmate, who offered to house me for a few weeks, until I found myself back on my feet. Those few weeks, turned into two months. Perhaps the most difficult hurdle to get over was that of financial clearance," he noted.

Having left Jamaica with US$500 (just over J$60,000 ) in his pocket, McKenzie was nervously staring down the barrel of a tuition cost of J$1.6 million per semester, amid other difficulties.

"Although I travelled to the US on numerous occasions before moving, nothing prepared me for the culture shock that I was about to experience. Something as simple as being able to guh roun di cawna to a cookshop when I needed something to eat, I had that luxury no longer," he told Rural Xpress.

McKenzie said looking back at all he endured, only God could have delivered him.

"Thankfully, my transition was made a bit easier by great friends who had migrated prior to my arrival. The international student struggle is real ... . Prayer led me to Mrs Karen Smith, who later became my campus mother and mentor. She worked tirelessly to help me find financial support, for which I am eternally grateful," said McKenzie.

He added: "One lesson this financial hardship taught me was, 'Do not tell yourself no before others tell you no', or simply put, 'Do not take no for an answer'. Had I given up after hearing the first no - and believe me, I cannot begin to express how many times I heard that two letter word - I would not have finished my degree.

But how did this 25-year-old from rural Jamaica move from being just an ordinary student, pursuing a degree, to becoming an All Star Ambassador to Oakwood University, by the White House Initiative on Historically Black Colleges and Universities, within the United States Department of Education?

Next week, we share with you Part II of the success story of a persistent young man with a dream.