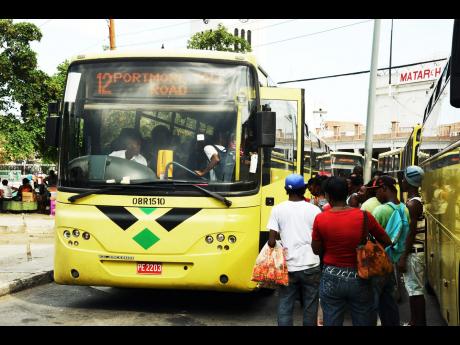 The Jamaica Urban Transit Company (JUTC) is appealing to passengers not to get upset or verbally confrontational with ticket inspectors who may pop up on the buses to check the validity of customers' tickets.

Pointing out that many individuals resort to disrespectful behaviour on seeing them, the entity's corporate communications manager, Cecil Thoms, said that more will be done by the company to properly sensitise customers on the real purpose of the inspectors.

"Inspectors requesting to see passengers' tickets are by no means an inconvenience, but on the contrary, is a measure to safeguarding the rights of the passenger who can be charged by the police for not having a ticket. It also protects their (passengers') interest in the event of an accident to ensure compensation. Passengers must understand that this exercise is done in their best interest," Thoms told The Gleaner.

"Oftentimes, passengers are of the opinion that the checking of tickets is a futile activity which amounts to a waste of their time, and on occasion, become upset and verbally confront our employees carrying out their duties. Plans are afoot to educate commuters via print and electronic media as to the importance of this activity. Accordingly, a similar programme is being conducted, offering in-service training to our inspectors with the ultimate aim of improving the relationship between commuters and employees, which the company considers a priority."

Thoms also noted that because there are not enough inspectors to cover all the routes, the checks are conducted randomly, which may be the reason customers get the impression that inspection is done once in a blue moon.

"Inspectors operate covertly and overtly. The unit is manned by 32 inspectors, and the JUTC dispatches on average 390 to 410 buses daily, hence, monitoring is random and may appear to a customer to be infrequent, but that is not entirely so, as different routes are monitored daily. Franchise inspectors operate from 4 a.m. to 12 midnight daily, to coincide with the schedule of our buses. We are strategic in our deployment of staff. Routes which have historically proven to be more problematic are monitored accordingly," he said.

He added that: "Drivers are deterred by the fact that at any given time or along any route within the KMTR (Kingston Metropolitan Transport Region), they can come under scrutiny from inspectors. Some major findings over the years include drivers failing to issue tickets, and schoolchildren engaged in inappropriate sexual activity. On two occasions, robbery attempts have been foiled by franchise inspectors."

Thoms also highlighted that because of the inspectors' random selection of buses, the frequency of robberies on board buses have dwindled significantly.