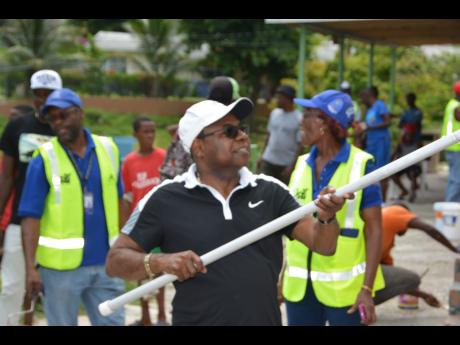 Edmund Bartlett, tourism minister and member of parliament for East Central St James, assists in painting the Barrett Town Community Centre, during Labour Day activities in the community on Tuesday.

Activities for Labour Day 2017 got off to an early start on Tuesday in the parish of St James, with a wreath-laying ceremony in honour of National Hero, the Right Excellent Samuel Sharpe.

Mayor of Montego Bay Homer Davis and acting custos of the parish, Claudette Bryan, headed the list of city officials, civic and business leaders and residents who were on hand for the tribute held in Sam Sharpe Square.

Davis, in his address, said: "There could not have been a more fitting way to kick off the Labour Day activities than to honour the memory of a son of the soil whose hard work and sacrifices contributed to a free and liberated Jamaica. Today marks 185 years since Sam Sharpe was hanged in this very square."

Following the Sam Sharpe Square ceremony, the focus turned to the Montego Hills Police Station, which was the Labour Day parish project.

The facility was renovated to include installation of new bathroom fixtures and windows, painting of the entire building, and bushing and cleaning of the yard.

Over in Barrett Town, volunteers turned out in their numbers to carry out work on the post office, police station, basic school and community centre.

Minister of tourism and member of parliament for East Central St James, Edmund Bartlett, who participated in the workday, said he was happy with the large turnout of volunteers.

Bartlett announced that Cabinet had approved $120 million to rehabilitate all the roads leading into Barrett Town, and the project should begin within the next four to five weeks.

Major work was also undertaken in Norwood, where volunteers turned out to patch roads and rehabilitate the community centre.

Residents also carried out work at the Montego Bay Transport Centre, a number of schools, and on roads throughout the parish.

A total of 63 projects were registered for St James for Labour Day, which was observed under the theme 'Restore. Preserve. Beautify'.