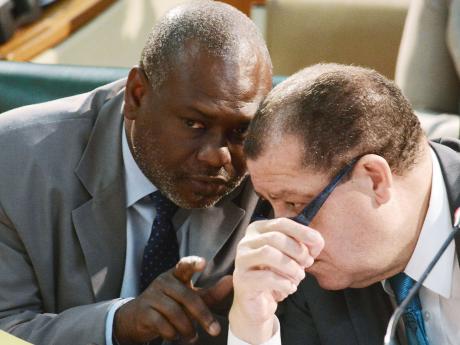 Everton McFarlane (left) speaks with Finance Minister Audley Shaw during a sitting of the Standing Finance Committee of Parliament in March.

Economist Everton McFarlane is to demit office as Financial Secretary in the Ministry of Finance and the Public Service next week.

It is understood that McFarlane will be going to head a state agency.

Meanwhile, several highly-placed sources in the administration say Viralee Latibeaudiere, a senior technical adviser to the finance minister, is tipped to replace McFarlane as financial secretary. Director of Communications in the Ministry, Elaine Oxamendi Vicet said a statement will be issued Monday that will address the replacement process.

"With effect May 31, an interim officer will have oversight responsibility for the ministry," she told The Gleaner this afternoon.

McFarlane, who has been on the job for less than a year, is to go on leave on May 31.

Latibeaudiere is a former director general of Tax Administration.

She lost a court bid to overturn a decision of the Portia Simpson Miller administration to sack her in 2012 following her appointment in July 2011 under the Bruce Golding government.

The financial secretary is similar to the permanent secretary in most other ministries.

That person is the chief accounting officer and is responsible for the implementation of government policy.