Private- and public-sector partnership - A catalyst for crime reduction 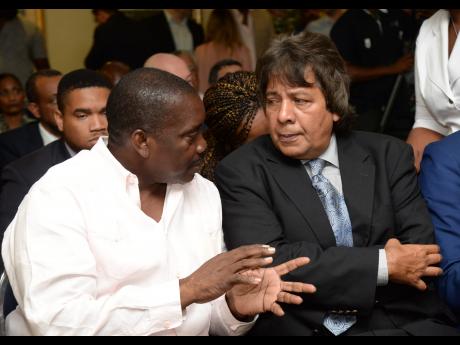 The Guardsman Group has called for action as they hosted a formal meeting of private- and public-sector stakeholders to discuss critical issues relating to national security. The event, which was attended by Prime Minister Andrew Holness and Robert Montague, minister of national security, highlighted the need for a joint approach between the private and public sectors in stemming the alarming levels of criminality in Jamaica.

"The government cannot act alone. The direct annual cost of crime is $261 billion per annum. We are all invested in this one boat of Jamaica; we all have to hold hands and paddle together in the direction of prosperity," Holness said.

The forum was divided into two panels with high-ranking officials in the security forces and members of the business community represented on each. Speakers included Richard Pandohie, deputy president of the Jamaica Manufacturers' Association; Nicole Madden-Greig, immediate past president of the Jamaica Hotel and Tourist Association (JHTA), Peter John Thwaites of the Private Sector Organisation of Jamaica; Clifford Blake, deputy commissioner of police, Commander George Overton, director of operations of the Guardsman Group of Companies; Major Frans David Hall; of security advisory management services, and Major Johanna Lewin, from the Ministry of Finance.

"The first step is to learn the reasons for this problem and deal with that aspect first. We hope that this forum is the first step. We were able to bring together a diverse panel with unique opinions on the root cause of crime and together, I believe we can find a way forward," said Vinay Walia, managing director of the Guardsman Group.

During the forum, the Guardsman Group offered the support of its private security forces to assist the Jamaica Constabulary Force (JCF) with needed manpower.

"Scotland Yard, one of the best detective agencies, is guarded by private security guards. Our police force needs support so that they can deploy their highly skilled and highly trained staff in an effective way that ensures that our public safety needs are met. The private sector can aid in this," said Kenneth Benjamin, executive chairman of the Guardsman Group.